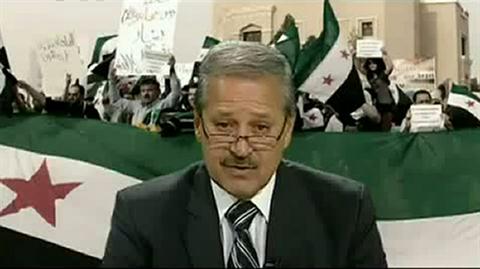 An image grab taken on July 12, 2012, from a video broadcast on the Qatar-based Al-Jazeera shows the Syrian Ambassador to Iraq, Nawaf Fares, reading a statement in which he announces his defection to the Syrian opposition, on July 11, 2012. Fares urged the army to turn its guns on the regime, becoming the most senior diplomat to abandon President Bashar al-Assad. AFP PHOTO/AL-JAZEERA FP PHOTO/YOUTUBE TENT, DATE AND LOCATION WHICH CANNOT BE INDEPENDENTLY VERIFIED =

« I personally reproach the (Iraqi) prime minister on his stance which is contradictory to the truth, » Fares, who defected earlier this week, told Doha-based Al-Jazeera television channel.

« He knows very well what (Syrian President) Bashar al-Assad had done to him and to all of Iraq and to (Muslim) Shiites specifically, Fares said, adding that Assad has « killed thousands » by opening « the doors for Al-Qaeda » militants to carry out bombings across Iraq.

Iraq had repeatedly accused Damascus in the past of letting Sunni insurgents and arms transit through Syria for carrying out attacks inside the country, especially during the brutal sectarian conflict that erupted after US-led forces toppled Saddam Hussein’s regime.

But since the uprising against Assad — who belongs to the Alawite minority sect which is an offshoot of Shiite Islam — Iraq’s Shiite-led government has called for non-interference in Syria and has opposed arming the rebels.

Baghdad’s stance was similar to that of Syria’s other Shiite ally Iran which Fares accused of « putting pressures » on Maliki’s government.

« Iran must not support a tyrant and dictator who is killing his own people, regardless of its interests, » Fares told Al-Jazeera in Qatar, where he has fled.

Western countries and the Syrian opposition accuse Iran of providing military support to the regime in Syria, where more than 17,000 people have been killed since March 2011 according to activists. Tehran denies the charge.

When asked on UN-Arab League envoy Kofi Annan’s bid to shore Iran’s support for his tattered peace plan, Fares said: « Iran is part of the problem, how could it be part of the solution? »

« The Syrian revolt will win despite Iran and all countries backing the tyrant » whom Fares described as « Syria’s former president who is now a criminal and a killer. »

Fares, the first Syrian ambassador to defect to the opposition, was widely seen as a regime hardliner and his decision, announced on Al-Jazeera on Wednesday, was surprising.

Syrian foreign ministry had said Fares, who hails from a prominent Sunni tribe from eastern Syria, had been dismissed and would be prosecuted.