With hundreds of news sources and social media feeds about Syria – some of which publish rumor, hearsay or even fake stories – we speak with Dirar Khattab, the managing editor of the Syrian fact-checking website Takkad, on what they are doing to combat this problem.

It’s long been said that truth is the first casualty of war. Nowhere is that more evident in the world today than in the Syrian conflict, where rumor, hearsay or even fake stories are common in local news sources and social media feeds. 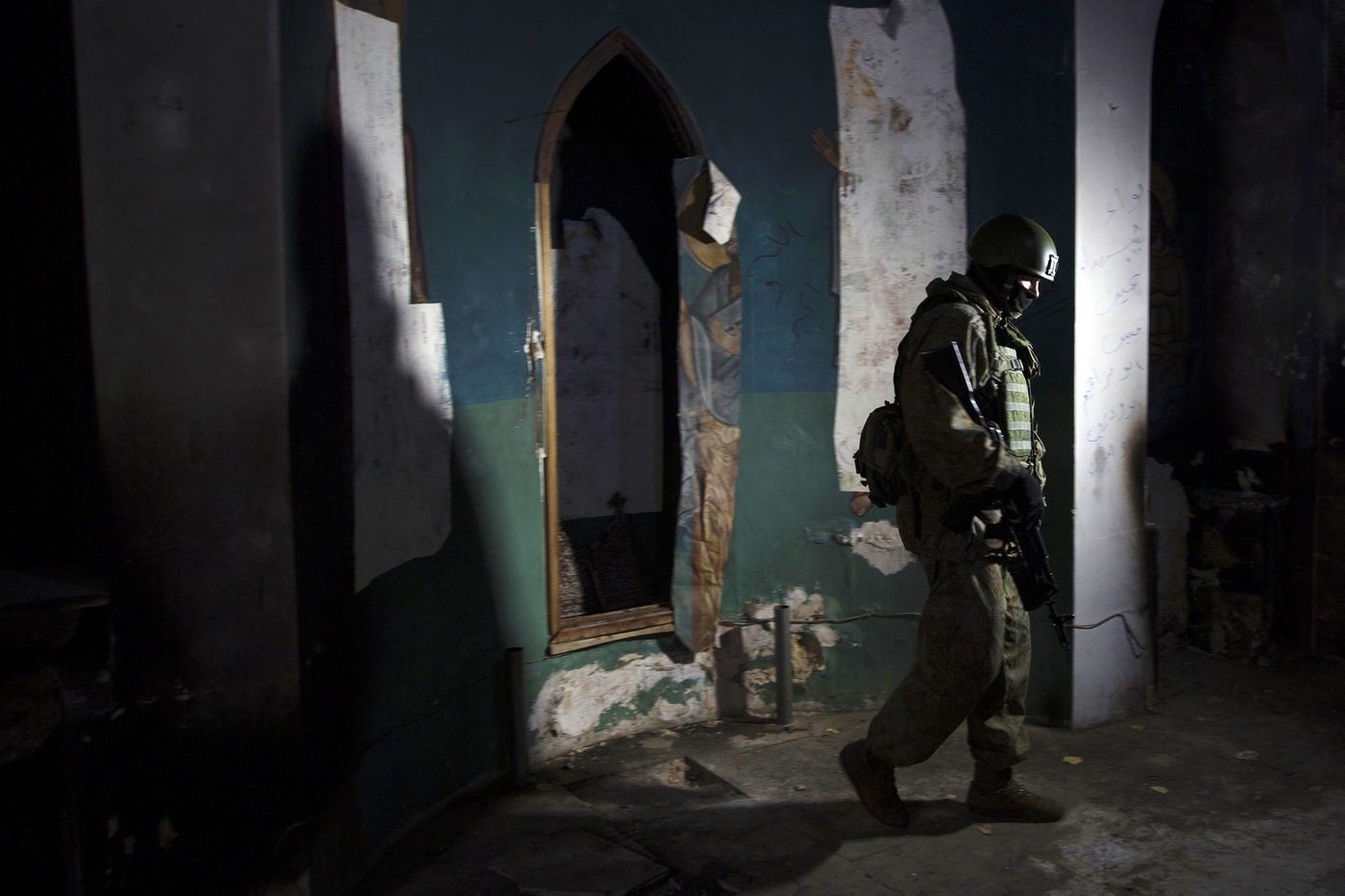 A Russian soldier, who escorted a group of journalists, walks inside a Greek Orthodox church in village of Maaloula on March 3, 2016. AP/Pavel Golovkin

Last year, several Syrian journalists decided that something needed to be done about the situation and, in March, launched Takkad, or Verify, an online platform that exposes and corrects inaccurate news stories and information coming out of Syria. The platform focuses largely on social media, but also examines reports by international news outlets.

The platform is run by a team of volunteers – four editors, five reporters, two translators and two technologists – all of whom have full-time jobs, but spend their spare time hunting down false news.

The website has already built a 30,000-strong readership across its social media platforms and become something of a success story for the post-uprising Syrian media. The website’s mission is to encourage people to verify all information from and about the Syrian war, using at least two sources they deem to be trustworthy.

The platform’s managing editor, 30-year-old Dirar Khattab, spoke to Syria Deeply about his team’s work, and the importance of holding media outlets accountable for the information they share.

Syria Deeply: Where did the idea to form such a platform come from?

Dira Khattab: It is almost impossible to take stock of the number of media publications, news outlets, radio channels and pages that have emerged from Syria specifically, and from the region generally, in the past five years. This never-seen-before freedom to share information and content in the Middle East without government supervision has given people a chance to share unverified information about the events taking place in the country. The new media in Syria is clearly divided on the basis of political and ideological affiliations. Unfortunately, some media outlets don’t have a problem with spreading lies as long as these lies serve a purpose, or an interest.

So, your platform concerns itself with news published by both government and opposition sources?

Khattab: It is important to note that when discussing biased and unprofessional media, the alternative media doesn’t hold a candle to the state-run Syrian media outlets. The lies that the government has been telling for years, even before the uprising, can make any propagandist blush. Nonetheless, we look into verifying news written and shared by opposition media more than that of the state-run media in Syria. The reason is because we want all alternative media sources to learn what it means to be professional and objective when covering news, and that news and information are a responsibility, and the freedom to share news and information is a responsibility, as well.

How does your work benefit the reader?

Khattab: It is crucial for the reader and listener to know the value of news, and of uncensored media. We want the reader to receive information with a grain of salt. The responsibility doesn’t only lie on the writer or the producer of content, but also on the receiver. Critical thinking is something we need to reinforce. We respect the human mind, something that the government media has never done.

In a perfect world, our platform and the work we’re trying to do would become obsolete, as all readers would see the difference between real news and fabricated information.

The average readers today cannot verify the news, as they can’t go back to the Russian, Iranian and Western media. This is where platforms like ours help the reader.

The amount of misinformation and lies that some news outlets spread out of Syria is unfathomable. Whether it’s Hezbollah’s propaganda [hub], al-Manar, or Russia’s RT, these outlets spread lies to support the Syrian regime’s version of what is happening in Syria.

Your website also needs credibility to attract more readership. How have you been able to ensure this?

Khattab: This might sound ironic, but anything we publish is based on a lie, and our platform is based on an accumulation of lies. Our job is to take that lie, and prove that it’s a lie, and that, believe it or not, doesn’t take a tremendous amount of effort. Anyone who has been working in media for the past six years and is connected to the Syrian crisis would know a lie when they see it.

Lies and fabrication of information are our main resource to begin work, but that’s not enough, because in order to refute false information, you need to present the alternative to the lie, which is the truth.

Our platform is not about calling people liars, it’s about presenting the truth, or the real source of information.

We never deny a piece of news, a statement or an image unless we are able to present a document that proves it has been fabricated.

With a team this small, and consisting of volunteers, how are you able to monitor the news and verify the content on a daily basis?

Khattab: We depend on a database of information about the events that took place in Syria since 2011. This database is not on my laptop, or on anyone else’s laptop, for that matter. It’s the knowledge, and the time spent accumulating this knowledge.

Every day, I go through at least 25 news websites, and not less than 150 Facebook pages run by local news outlets, local councils, rebel factions and so on. We also receive hundreds of messages on our Facebook page from people asking to verify a certain piece of news.

How does knowing that there’s a media watchdog verifying news change the way news outlets behave?

Khattab: I like to believe that being held responsible for the information you share makes you vet your information properly so we don’t have to do it for you at the expense of your credibility.

Eventually, that’s our end goal, we want verification and critical reception of information to be the norm, we want to eliminate the need for our platform.

However, looking at the current state of media, i think we still have a long way to go.

Are you looking to expand your team?

Khattab: Our team is small but we work in harmony, as we all trust each other and are sure of each other’s work ethics. We would love to expand our team in order to produce more content, but i think that would require a long verification process in order to be sure of the person’s ability and willingness to handle the responsibility.

Our job is not the easiest. It’s hard to appoint yourself as a watchdog over hundreds of news outlets. We don’t only verify information posted by Syrian channels and websites, we have previously called out BBC Arabic on its misleading coverage, and it accepted it with grace and apologised.

Do you receive any financial support?

Khattab: We received a grant from an organization that helps media startups, and we spent it on launching the website and setting up our work, but since then we’ve been depending on volunteer work. We’re dedicated to what we do, and that’s why finance has never been the issue. Sometimes we pay the costs out of our own pockets.

You have recently introduced English articles on your platform. Do you think it’s important for the Western reader to know the difference between trusted sources from Syria, and those writing false information?

Khattab: We make sure that major stories from Syria that gain the international media’s attention get translated and reach a Western audience.

For example, there were the recent mass killings in the village of al-Zara [in northern Homs], which were widely discussed in international media. Many of the images attributed to the incident were either fake, or were taken at a different time. That’s why we made sure we translated our verified articles about the subject to English.

We spend hours writing our articles, while other outlets don’t even bother to double or triple check their sources. In a complicated war like Syria’s, delivering the correct information is not easy.