For the new elite, peace would be bad for business 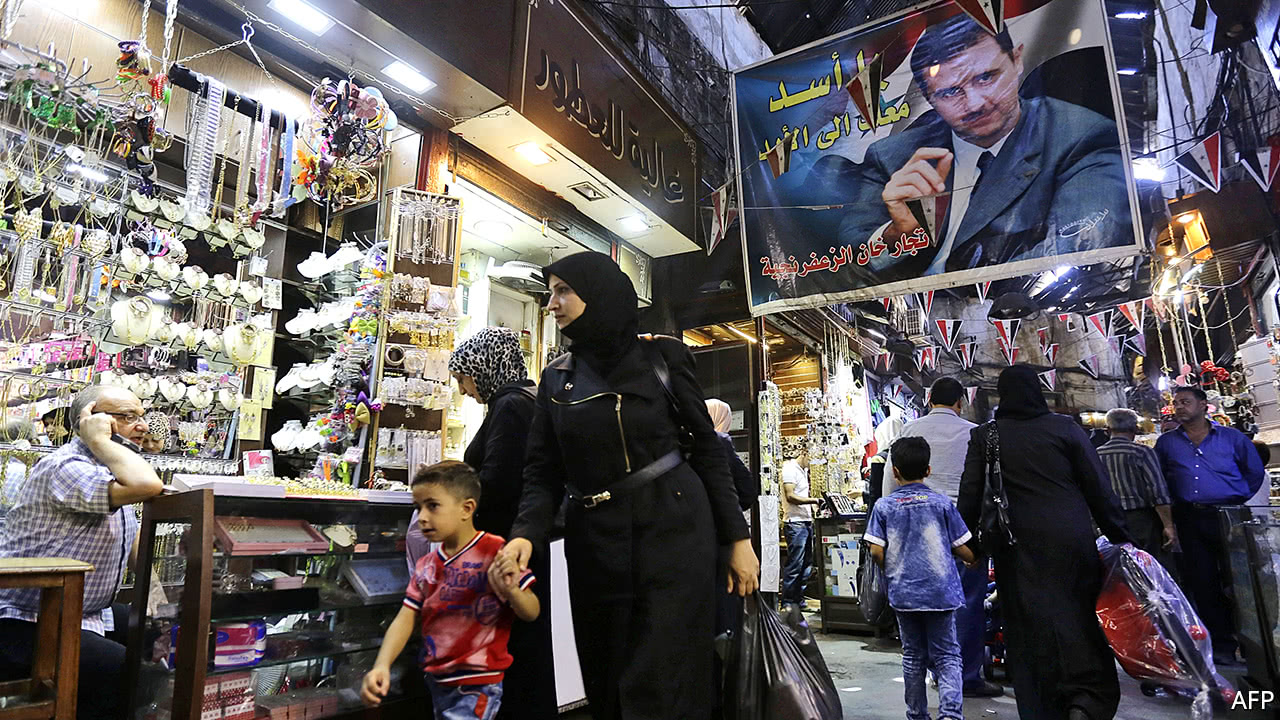 AMID the ruins of Syria, Mohieddine Manfoush has carved out a kingdom built on cheese. An unremarkable man with 25 cows to his name before the conflict began, Mr Manfoush now has his own militia, a herd of 1,000 cattle and a company whose dairy products have become ubiquitous in Damascus.

For those with the right connections and an appetite for risk, the war has opened up lucrative sources of revenue. For Mr Manfoush, his new-found wealth is directly bound to the regime’s preferred tactic of siege warfare. This has proved effective at isolating, containing and strangling rebel redoubts into submission without consuming too much of the regime’s dwindling manpower. The sieges have generated lots of money, too.

Mr Manfoush’s cash cow has been the siege of Eastern Ghouta, a large rebel-held region east of Damascus. In mid-2013, regime forces surrounded the area, whose rich farmland supplied the capital with most of its meat and cheese before the war began. As the siege tightened, its dairy farmers slowly lost access to their customers in the capital. With the ensuing milk glut in the enclave, prices collapsed.

Using his contacts, Mr Manfoush, who owned a small cheese business, struck a deal with the regime. He began to bring cheap milk from rebel territory in Eastern Ghouta to regime-held Damascus, where he could sell it for double the price. The regime received a cut of the profit. Mr Manfoush reinvested his share. He snapped up the region’s best cows and dairy machinery from farmers and businessmen whose livelihoods had been hammered by the siege. As the business evolved, the trucks that left Ghouta with milk and cheese came back laden with the barley and wheat he needed to feed his growing dairy herd there and run the bakeries he bought.

As the only trader allowed to bring goods in and out of Syria’s largest besieged area, Mr Manfoush could control prices. When these peaked in the winter of 2013, as the regime tightened the siege after killing 1,400 people in a sarin gas attack, Mr Manfoush was charging $19 for a kilo of sugar (in Damascus the same amount cost less than $1). With a captive market of 390,000 people and the sole right to import food, fuel, medicine and other necessities, Mr Manfoush’s profits—and those of his patrons in the regime—rocketed. The rebels dug tunnels out of the enclave to try to diversify supply, causing prices to fall back, though they are several times higher than in Damascus. Even with such competition, the checkpoint through which Mr Manfoush trucked his goods became known as the “Million Crossing”. Residents believe it generates $5,000 per hour in bribes for the soldiers who man it.

Foreign aid further boosted Mr Manfoush’s profits. Organisations funding bakeries and local councils were forced to rely on him to transfer hard currency into Eastern Ghouta. This in turn generated even more money for the cheese king, who benefited from the different exchange rates inside and outside the rebel enclave.

Estimates of Mr Manfoush’s wealth vary. What is known is that the cheese trader can afford to keep a private militia of about 500 men and a workforce of around 1,500 who are paid as much as $250 per month—more than rebel commanders pay their fighters. He has bought up property in Damascus and his factories inside the rebel enclave churn out dairy products, crisps, canned goods and juice.

Aside from its cut, the regime has also won a degree of quiet from Mr Manfoush’s part of Eastern Ghouta. “People see him as a sort of Robin Hood character. He’s the only one bringing in food and their area is not being bombed like the others. They love him. People don’t want the rebels to upset things,” said Youssef Sadaki, a Syrian political analyst who has studied the siege economy in Eastern Ghouta.

The new business elite does not just make money from the sieges, but from the general economic breakdown. During the course of the war, the country’s economy has progressively withered. International sanctions and damage to infrastructure have crippled its oil and gas sector, once the main source of government revenue. The government has financed its huge deficits by printing money and eating up its foreign reserves. The Syrian pound has lost four-fifths of its value, and reserves have dropped from $20bn to $1bn since 2010. The IMF says Syria’s GDP today is less than half of what it was before the war.

As the fighting dragged on, many of Syria’s big businessmen fled, moving their assets abroad. Those who remained, mostly the owners of smaller firms, have filled the vacuum. The services they provide vary, but most involve facilitating the flow of goods into regime-held areas. Others have helped the regime skirt sanctions, establishing front companies that import fuel, food and luxury items.

Whether Mr Manfoush and his kind retain their wealth after the war will depend on how the conflict plays out and on the peace that follows. “He is swimming with the sharks,” said a businessman who knows the cheese trader. “He doesn’t know when the regime will bite him but they will, and they’ll spit him out when he’s no longer any use.” Others, however, believe he will endure; that the networks and connections that war millionaires have built will survive. If they do, they will be well placed to benefit from the reconstruction money that will flow once the war ends. Those who have grown rich during their country’s darkest hour may thus be the ones who are paid to rebuild it.