Syria’s Palestinians: Stateless and hapless as ever – by The Economist

Syria’s Palestinian refugees are being both thumped and cold-shouldered 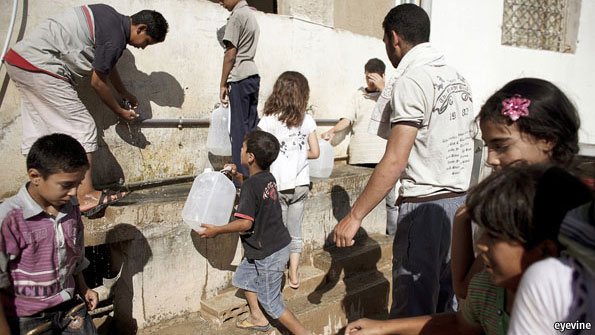 HELD in a hostel for migrant workers, Palestinians who have fled Syria’s civil war pass their days exchanging pictures on their mobile phones of the corpses of relations who failed to get out. “They are here till the war ends,” says a sympathetic Jordanian policeman, who mans a checkpoint near the hostel to bar their way out.

Close relations in Amman need permits to visit their camp in the midst of a barren free-trade zone rather hopefully named Cyber City, near Jordan’s border with Syria. Families cram into small rooms, with grey UN blankets for doors. Each inmate lives on coupons worth $30 a month that they can spend at a lone camp stall. Unlike the Syrians who stream into Jordan each night in their hundreds, no one formally recognises the Palestinians as asylum seekers. The UN shunts responsibility from one agency to the next. Yet the Palestinians who are let into Jordan are relatively lucky. The UN says three-quarters of the 500,000 Palestinian refugees who have been living in Syria have been harmed in the uprising. More than 600 of them are thought to have been killed.

Rebels and regime forces are recruiting and arming Palestinians, dragging their camps into the fray. Some rebels have sought refuge and medical treatment in the camps, hopeful that the UN agency responsible for Palestinian welfare might offer international protection. Some later sought to use the camps as a haven to shoot at loyalist forces, who shot back. Shelling since the summer has emptied Deraa, a dismal Palestinian camp of some 23,000 near Syria’s border with Jordan.

The regime has turned to Palestinian militias it has sponsored for decades. Some have eagerly responded but others, most notably the Islamist movement, Hamas, have changed sides. So the camps have become battlefields. Seeking safety in numbers, many Palestinians in Deraa fled to Damascus, only to find themselves caught in the crossfire again. Dozens have been killed in fighting in Yarmouk, a camp-cum-suburb on the edge of Damascus that is home to 80% of Syria’s Palestinians. On November 12th Palestine Street, a main road to the camp, erupted in flames.

Some 10,000 have fled to Lebanon, but only 1,600 have got into Jordan. That figure is surprisingly low, since Jordan houses half of the 400,000 Syrians who have fled the carnage, and Deraa is only five minutes’ drive from the border. Unlike Syrians, Palestinians need visas to enter Jordan, which for over a year, say exiles, have not been dished out. Some forge Syrian papers to slip in and hide with relatives. Palestinians caught crossing are usually sent back. “Wein Baba (Where’s Daddy)?” cries a toddler, banging his fists. His father handed himself in to Jordan’s authorities but within three hours was back in Syria; soon after he was killed. “Neighbours aren’t very welcoming to Palestinians,” sighs a senior UN refugee-agency man, Filippo Grandi.

For decades, Jordan’s monarchs did more than any state to provide a haven for Palestinians. But the influx has reduced the kingdom’s indigenous Bedouin to a minority. Though they dominate the armed services, they fear that letting any more in will turn their realm into a Palestinian state. At the Cyber City checkpoint, the police have stitched “Jordan First” emblems onto the lapels of their uniforms, as if to imply that Palestinians come second.

Jordan has other reasons for fearing a spillover. Some 3,800 rebels have slipped in alongside the refugees. Jordan fears they may not only provoke Mr Assad’s regime to strike back, perhaps with car-bombs, but may also raise the flag of jihad to recruit Jordanians to their cause. Last month Jordan said it had uncovered three Salafist plots, two of them orchestrated by Syrians, to bomb civilian and Western targets in the kingdom. America has sent 150-plus military advisers to Jordan, perhaps to prepare for the creation of a Syrian buffer zone across the border from Jordan.

With Jordanians this week taking to the streets across the kingdom to protest against rises in the cost of fuel, the government and the king are unusually edgy. Jordan’s Muslim Brotherhood, with its ties to Hamas, is limbering up for a showdown. All of this has tempered the king’s initial eagerness for a new regime in Syria.