Syria’s Refugee Children Have Lost All Hope – by Sulome Anderson 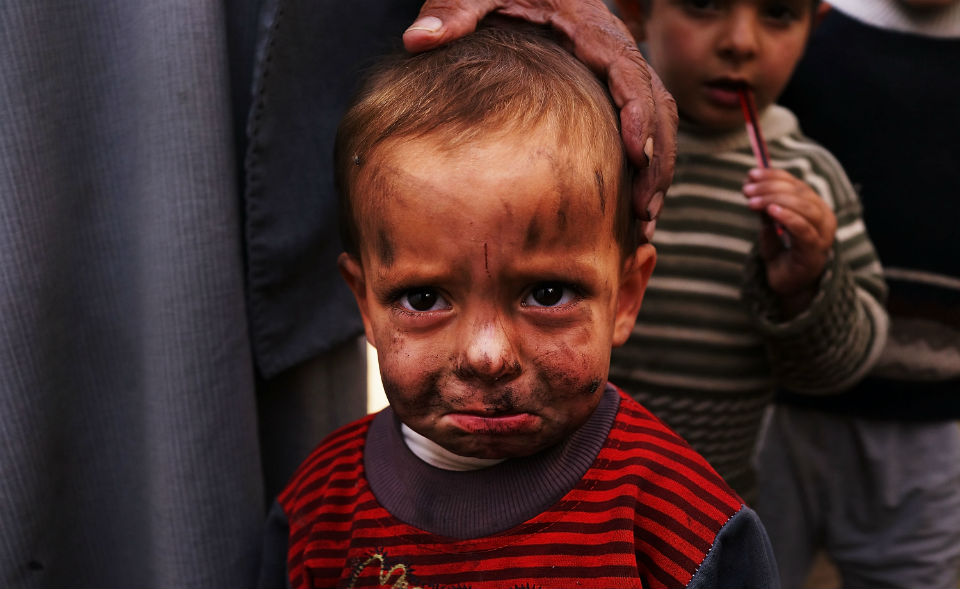 Young Syrians living in Lebanon are attempting suicide in ever greater numbers.

TRIPOLI, Lebanon — At a makeshift refugee camp just south of this northern city, a 12-year-old Syrian girl named Khowla sits on a dirty mattress in her tent. The roof is made of blue plastic tarp that does little to protect her from the intense sunlight. Though there hasn’t been rain in a few days, the concrete floor is damp and covered in a slimy film.

“When I tried to kill myself, it was like the devil filled my head,” she says, twisting her hands in her lap, her voice flat and expressionless. “I don’t remember much about it. All I could think about was that we have nothing, our lives will never improve, and I could relieve my mother of another burden.”

In February, Khowla’s mother, Sanaa, came back to their tent to find her lying on the floor, foaming at the mouth and vomiting. She had swallowed rat poison she found in the camp. Khowla was in intensive care for 18 days.

“She was between life and death,” Sanaa says, stroking her daughter’s hair. “I asked her,

‘My daughter, why did you drink the poison?’

‘My daughter, why did you drink the poison?’She said, ‘Mama, there are seven of us and you work and work to feed us, but you can’t keep up. Without me, there will be one less person to feed.’ When she said that, I couldn’t stop crying.”NGO workers say the dismal living conditions for Syrian refugees have contributed to a rash of suicide attempts. More than 1 million refugees are registered with the United Nations, and the number of unregistered refugees fleeing the civil war next door is thought to be much higher. Lebanon forbidsthe construction of permanent refugee camps, so some Lebanese set up temporary camps on private land, sometimes forcing refugees to pay exorbitant rent. Given the lack of governmental oversight or accountability for these landlords, known as shawishes, refugees living in their camps are often mistreated and can be evicted at any time. The Lebanese government also forbids Syrian refugees from working, while simultaneously establishing an arduous process for receiving a residency permit, which costs far more than many Syrians can afford.

Under these circumstances, Syrian children and adolescents are particularly vulnerable to mistreatment and abuse. Forced prostitution and rape have become commonplace: In April, 75 Syrian women were rescued from sexual slavery at a brothel in Lebanon. They had been beaten, tortured, electrocuted, and compelled to have sex more than 10 times a day. Increasing numbers of teenage Syrian girls are entering early marriages in order to receive financial and physical protection from their adult husbands.

Given the misery to which their lives have been reduced, it should be no surprise that many Syrians are turning to suicide as an escape. According to a 2014 United Nations Population Fund (UNFPA) study, 41 percent of Syrian youths in Lebanon say they have had suicidal urges. Local NGO workers say they have been unable to compile precise statistics on suicide attempts and completions, because much of the refugee population is deeply religious and suicide is considered a grievous sin in Islam. But they do say that incidents of suicide attempts by adolescent Syrians are being reported with increasing frequency.

“The problem [of suicide] is very frequent among Syrian refugees, especially adolescents and young adults,” says Hala Kerbage, a psychiatrist who has worked with NGOs to treat displaced Syrians in Lebanon. “These young people are very affected by a change that they feel is not reversible. Most of them feel as though they’re suspended and there’s no prospective future for them.”

Kerbage says there is only one way to prevent young refugees from reaching the level of despair that would prompt a suicide attempt: investing in their future. “Giving them a purpose to their life is absolutely necessary, because when they drop out of school and they’re in the camps all day long, of course they’re going to have behavioral disturbances,” she says. “Doing group activities, community activities, recreational activities, creating child-friendly environments — this is what a lot of NGOs are trying to do right now.”

In a dark room at an educational center for refugee children in the Bekaa Valley run by a Lebanese NGO that has asked to remain anonymous, Soha, 14, whose name has been changed, begins to cry. She has a nervous smile that belies the tears she’s trying to fight back.

“My father is very cruel to me,” she says. “Two days ago, my mother and father were fighting. They were screaming at each other.… I get very bad migraines, and I started crying. He said, ‘Why are you crying?’ and I told him I had a headache. He asked me why I had a headache, and I said it was because of all the screaming. So he told me, ‘If you don’t like it, you can go away and kill yourself.’”

Asked if she’s ever tried to commit suicide, Soha nods, looking at the floor.

Asked if she’s ever tried to commit suicide, Soha nods, looking at the floor.“One time, my father hit me very hard and tried to stab me, so I locked myself in a room and cut my arm with a knife,” she says quietly. “I wanted to die.”

Soha says that coming to the NGO’s educational center is the only way she can get through the day. “I love the music lessons,” she says. “I feel calmer when I play music. When I come here, I never want the day to end. It gives me hope.”

Outside, the chatter of children emanates from seven or eight makeshift, tented classrooms. Brightly colored children’s paintings line the walls of each tent. At the center’s administrative office, Rima, one of the NGO’s social workers, whose name has also been changed, explains how the center tries to act as a safe haven for these children.

“Less than 1 percent of them say they have any hope when they first arrive,” she says. “When I ask them to draw things for me, they draw pictures of guns, bombs, and things related to war. I put colors in front of them, and they always choose black.”

The educational center is critical to rebuilding the children’s lives. The Syrian children, who are encouraged to interact with other refugee kids, are offered classes where they cannot only continue their education but express themselves through music and crafts. “We try to provide them with the tools to develop a sense of self,” she says. “If a person is in a deep hole and they see even a little ray of light, they just want to reach out and grab it.”

But the woman who runs the NGO says this center, and others like it, is slated to close by the end of the summer due to funding cuts by UNICEF.

“They said that places like this are not sustainable,” she says bitterly. “We have three months to prepare the children to tell them that we’re leaving.… The new model [for the U.N.] is to work with governments in regards to refugees. It’s all very political. They want to make the Lebanese government responsible for taking care of the refugees. But we don’t have basic health services even for the Lebanese, and there is barely anyplace in schools for Lebanese children, let alone Syrians.”

UNICEF is suffering from a shortage of funds to meet the needs of the refugee population. As of May, the organization reported that it required $479 million to help Syrian refugees in Lebanon but had received only 39 percent of the necessary funds.

“UNICEF’s partnership with local and international NGOs is a key component in how we respond to the needs of children in Lebanon,” Salam Abdulmunem, a UNICEF spokesperson, wrote in an email. “We work with around 10 NGO partners to help children get back to [and stay in] school through activities that take place in the informal settlements themselves, at NGO centers but also in public schools with the Ministry of Education. Our NGO partners are a vital part of our response just as much as strengthening government systems is, both are linked.”

That response is cold comfort to the Syrians at the center.

“When this place closes, all our services will end,” Rima says. “The girls will all get married, and if they can’t find work, the boys will become criminals. Lebanon will become less safe not only for the Syrians, but also for the Lebanese.… It’s like we took them halfway and abandoned them. What kind of a future will they have now?”

Khowla, who has no access to schooling or psychological services, says she doesn’t want to have a future at all under these conditions. Asked if she intends to attempt suicide again, she is matter-of-fact.

“In Syria, we were living a poor life, but at least it was a life,” she says. Her brown eyes are empty, haunted — the eyes of an exhausted old woman, not a 12-year-old girl. “We had our pride and dignity. We came here, and we have nothing. If the situation doesn’t change and our lives stay like this, we should all kill ourselves.”