A group of artists, Comic4Syria, are producing comic strips on Facebook in response to the brutality in their country

In one cartoon, Bashar al-Assad tickles the dragon of sectarianism – and it swallows him whole.

Bashar-al Assad tickles the dragon of sectarianism – and it swallows him whole. Photograph: Comic4SyriaComic strips are the latest art in the arsenal of the Syrian revolution. The country has always had a strong tradition of highly metaphorical editorial cartoons in its heavily censored press. Recently a new generation of illustrators, graphic designers and animators, some with backgrounds in fine art or advertising, have been anonymously posting their responses to Syria‘s turmoil on the new Facebook page Comic4Syria. 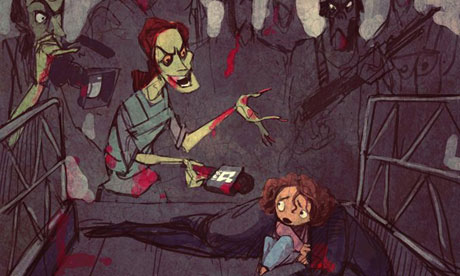 ‘Who did this to your mum, my darling?’ Photograph: Comic4SyriaOne of them, Chase, celebrates the centrality of graffiti in the revolution and recounts the murder of the Spray Man of Damascus, Nour Hatem Zahra, by a member of the unofficial pro-regime militia, the Shabiha. Another cartoon captures a pivotal interview by pro-government Addounia TV reporter Micheline Azar – complete with her legendary manicure – in the immediate aftermath of a massacre in the capital’s suburb Daraya. « Who did this to your mum, my darling? » she coos to a child sitting beside a corpse. 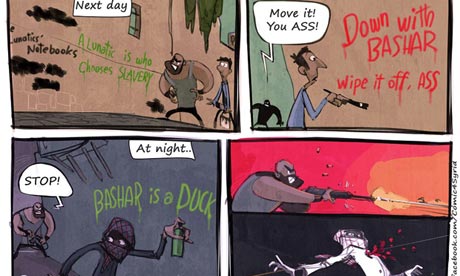 Spray Man of Damascus, Nour Hatem Zahra. Photograph: Comic4SyriaMost Middle East comic strips, such as The 99 about Muslim superheroes from Kuwait, are aimed at children. Comic4Syria draws its strength and sophistication from the politically charged graphic novelsPersepolis by Marjane Satrapi and Palestine by Joe Sacco. 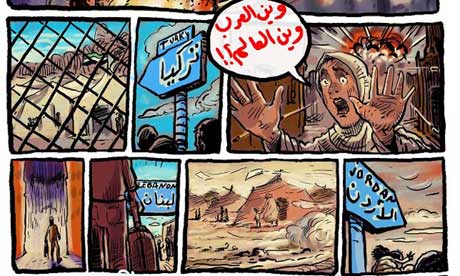 ‘Where are the Arabs? Where is the world?’ Photograph: Comic4SyriaThe strip Samoud – Arabic for « steadfastness » – aligns the situation in Syria with the Palestinian struggle. The use of this motif is doubly ironic precisely because the Ba’athist regime has pretended to champion the Palestinian cause. In the strip, as Syrian refugees flee across neighbouring borders, one cries out – « Where are the Arabs? Where is the world? » – the same words uttered by a Palestinian victim of the 1982 Sabra and Shatila camps massacre in Beirut, which was caught on news footage. The same clip received a new lease of life when it was included at the end of the 2008 animated quasi-documentary Waltz with Bashir.

Many of the comic strips include the slogan « alsha’ab yurid isqat al-nizam » (« The people want the overthrow of the regime »), which fuelled Tunisia and Egypt’s Arab springs. It also kickstarted the Syrian revolution when a juvenile posse in Deraa was arrested for spray-painting the slogan, tortured and returned to their families.

« Huriya » (« Freedom ») also regularly appears and characters shouting it are either shot in the head or held hostage by gunmen. From the frontline of horror, Comic4Syria is not for the faint-hearted.

Malu Halasa talks about Syria’s Art of Resistance at the Nour Festival of the Arts, Leighton House, London on 19 October, 7pm