When Reham Abo al-Nojoom fled Syria, she had to abandon her life as an artist. Now, in collaboration with German sculptor Astrid Hilt, she uses her works to serve as a “cultural ambassador” for the home she left behind.

IT HAS BEEN just over a year since Germany opened its border to refugees, spurred on by Chancellor Angela Merkel’s assertion that “We can do it.” In 2015, more than 1 million refugees arrived in the country, about 428,000 of them from Syria.

Among those who have found refuge in Germany is 24-year-old artist Reham Abo al-Nojoom, who grew up in Daraa, a city in southwestern Syria and an early bastion of the uprising against President Bashar al-Assad’s regime. When the civil war erupted in 2011, al-Nojoom was studying in Damascus. Two years later, she escaped to Jordan and lived with one of her sisters. But in the summer of 2015, her sister decided to move to Sweden and reunite with her husband. al-Nojoom headed for Germany, where an older German couple took her in. That was when she met another artist, Astrid Hilt, and their friendship evolved into a collaboration.

Now, with Germany retracting its warm welcome as it struggles to accommodate all the asylum seekers who have arrived in the country, al-Nojoom and Hilt are working together to make art that, they hope, can help ease the tensions between the people of Germany and the people looking to make the country their home.

“Reham was the first refugee I personally met. My circle of friends has exploded since then,” says Astrid Hilt, laughing while she sits at al-Nojoom’s kitchen table on a recent Sunday afternoon.

Al-Nojoom now has a home in Homburg, but she was still living with the German couple in nearby Kirkel when she and Hilt, 43, happened to meet. Hilt, a stonemason and sculptor, volunteers for a local community group that helps refugees settle into their new lives. One morning, Hilt offered to bring some donated items to the homes of a few new arrivals, and in the car she discovered that al-Nojoom, the young woman giving her directions, was a painter and sculptor.

At the time, Hilt was working with some friends on an art project for the COP21 climate summit in Paris in December 2015. She asked al-Nojoom to join them.

“I was so happy to work again as an artist,” says al-Nojoom, who had attended the Fine Arts Institute in Damascus and was working as a part-time teacher before she left Syria.

The first piece al-Nojoom and Hilt worked on together was a wooden dolphin sculpture that they planned to take to Paris. “The dolphin is a symbol for peace and harmony,” Hilt says.

The project was abandoned after the Paris attacks in November 2015. But the dolphin survived, becoming the centerpiece of a small workshop exhibit, organized by Hilt and her husband Ralf Jenewein, that brought together the works of three German and three Syrian artists.

For her debut exhibit in Germany, al-Nojoom painted several large-scale portraits of women, each with their eyes covered by a white bar. She says the white is for hope, peace – and truce. “I see myself as a cultural ambassador for Syria,” she says. “I’m telling stories of hope and sorrow.”

Then came a series of cross-cultural shows called Dialogue of Cultures, which aims to showcase a variety of German and Syrian artists and encourage collaboration, dialogue and community among refugees and local residents. 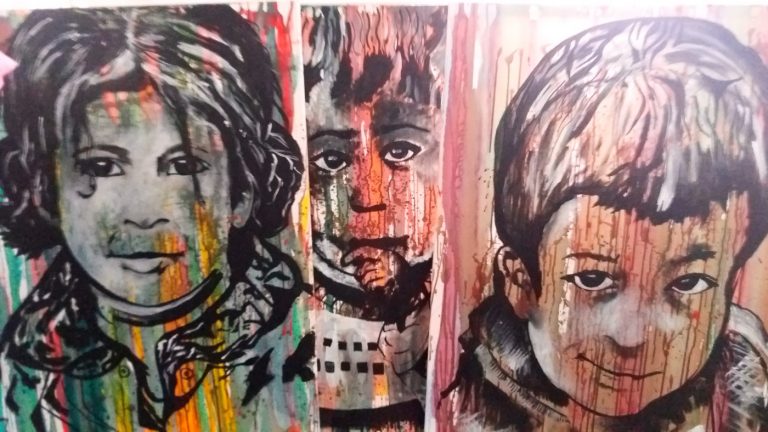 One of Al-Nojoom’s portraits of Syrian children, part of a series called Hope. (Sandra Prufer)

One of the works on show is the Faces From Here project by Syrian brothers Omar and Khaled Al-Mokdad, who took photos of volunteers in Kirkel and asked them why they’re helping refugees. Another is a set of watercolor paintings of Damascus street scenes by Nour Jaafar, a Syrian artist who has been living in Germany for two decades.

The exhibit first opened in March in Homburg, with following variations rolling out throughout the year, each in a different city with a different collection of works.

“Our hope was that the exhibit and surrounding cultural program, such as concerts with Syrian musicians and our German-Syrian choir, would help people realize that we’re much more alike than we are different,” Hilt says.

Much of the artwork in Dialogue of Cultures comes from the Syrian artists’ shared experiences of tragedy and loss. Many have left family behind in Syria, and some have lost loved ones to the fighting. “My mother and younger sister are still in Daraa,” says al-Nojoom. “I worry about them every minute.”

Al-Nojoom understands the desperation that drives people to flee, even when they can’t take everyone they love with them. When she decided to leave Jordan for Germany, she traveled, like hundreds of thousands of others, via the Balkan route. In Turkey, traffickers placed her in a small boat with 24 other people that was headed for Greece. “There was a leak in the middle of the boat and water was pouring in,” she says. “I and the people sitting next to me decided not to panic and to keep quiet about the danger.” After two hours, they reached Lesbos, “lucky to be alive.”

Her terrifying journey became part of a collaborative storytelling project, A Wall of Life Jackets and Their Stories. Started by the American political artist Fred George and British photojournalist Andrew Wakeford, the project brought together Hilt, al-Nojoom and other artists to create an installation made of 400 life jackets that refugees had left behind in Greece. 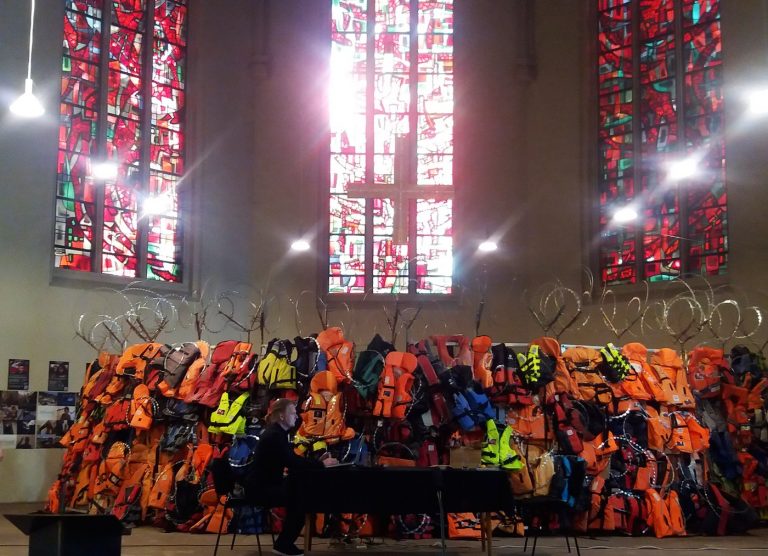 The exhibit A Wall of Life Jackets and Their Stories, which collected lifejackets left behind by refugees who reached Greece. The 10-meter-long wall was on display at a Lutheran church in Saarbrucken from mid-July to the end of August. (Sandra Prufer)

Al-Nojoom contributed some of her own black and white photos to the exhibit: a collection of portraits of refugees and local residents in Kirkel. “Reham is a powerhouse artist,” says George. “I’m amazed at the quality and amount of work that can come out of someone who is only 24 years old and just coming from Syria.”

For al-Nojoom and Hilt, a chance meeting has inspired a friendship and partnership that’s as much about fostering understanding as it is about creating art. The pair is already prepping for their next exhibition, the fourth edition of Dialogue of Cultures that opens in Berlin on September 26. And this time, the dolphin is coming, too.