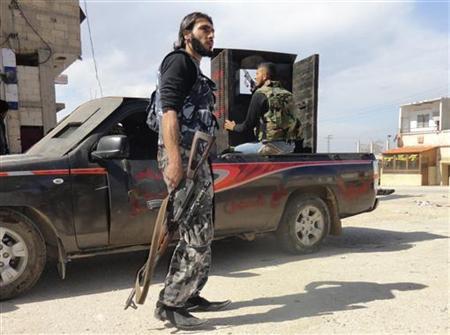 Members of the Free Syrian Army are seen deployed in al-Bayada district in Homs, February 28, 2012.

NORTHERN SYRIA (Reuters) – Syrian rebels like Said and Ayman lurk in a shady pine grove just minutes from their village, but it has been months since they saw home. They are sticking to a cause that has battered everything but their resolve to battle on.

Frontier fighters in the year-long revolt against President Bashar al-Assad are quietly securing posts on Syria’s border with Turkey, where they can pass supplies and also fight Syrian troops who get too close to home.

Underfed and under-armed against a massive army, their biggest comfort – that home is so near – is also their main source of suffering.

« Sometimes we’ll be operating right by my house, but I can’t go in. Can you imagine standing right outside your own house, and you can’t go see your family? » says Said, an unemployed 27-year-old. He patrols his tiny base – two tents leaning on a muddy mountain slope – in white leather dress shoes. Holes are worn through the soles.

Rebels asked that the location of their base not be disclosed, for their safety and that of the locals who help them.

Nearby Syrian villagers play ignorant when their sons disappear. Some fighters, like Ayman, an army defector, have faked their deaths and are now hiding just a few kilometres away, carving out rebel posts all along the border.

He secretly joined a group of rebels on the border several months ago. Their sagging tents of blue plastic tarp are stuffed with tattered mattresses and dirty pots and pans. Buckets are scattered to collect rainwater to drink.

« My parents know I’m alive, that’s it. Our neighbours think the rebels killed me, » says Ayman, a brawny 28-year old with a short trimmed beard.

The border is an ever-shifting belt of rebel control, says one of their commanders, Khaled Hammoud, a defected lieutenant-colonel.

« We have many points like this all along the Syrian side of the border from Latakia to near Aleppo. The idea is always to have a spot on the border where we can strike back if we need, » he tells a Reuters team visiting the outpost.

« There are more fighters now, they are hiding in the trees up the mountain. They can see you, but you can’t see them. »

Rebels choose positions minutes away from Turkish territory in case they run out of ammunition and have to flee.

They use diversion tactics, engaging Syrian forces in one part of the border to draw troops out of a nearby area so the rebels can freely move people or supplies. Rugged mountain spots on the border like this, with thick tree cover, are easiest to defend.

But their base, just a few kilometres from an army outpost, is not impenetrable. One long, narrow trench has been dug around this ramshackle camp as a last defence against attack.

When Hammoud arrives at the tiny mountain base, one of the fighters whispers about a fierce battle a week earlier.

« Two of our men were martyred here in an attack a while back, » says Said, his face wrapped in a black scarf. He says he has seen five people die at his base.

Almost all the rebels here have been hit. One man still wears the same pair of jeans torn with holes from where he says shrapnel pierced his backside.

A fighter who calls himself Mohammed holds his rifle in his right hand and uses a kerchief as a sling for his left arm, coated in fresh pink scars.

He defected from the army four months ago and has come to fight near his family and his fiancée, who are still in his village just on the other side of the mountain. Like most rebels, he is afraid of contacting them, fearing they could be arrested or killed.

« I don’t know anything about my family or how they are doing. I’m too scared to get in touch, » the 23-year-old says.

« I hear a bit about my fiancée now and then. I haven’t seen her for 8 months. »

Sporadic fighting between rebels and the army on the border means tensions are high and sympathetic Turkish villages nearby are often unable to sneak food to them.

« On those days of course we don’t really have much to eat. But we get by, day to day, » says Mohammed.

Then, rebels hunker down under their tarps in the rain with only onions from a plot they have planted, and a bucket of soggy potatoes.

Of all the fighters at the border outpost, only Said is unscathed by fighting. He knows the rocky paths well, having worked them as a smuggler when he couldn’t find work.

« There’s an army checkpoint nearby and sometimes they fire at us. I think it is mostly to provoke us, » he said. « Usually when they shoot, we go hide. We don’t usually go to Turkey because we can’t cross the border with our guns, and we don’t want to leave them here. »

But when the fighting gets tough and the ammunition runs dry, the men eventually have to flee, he says reluctantly.

It is easy to spot where most have ended up: Young bearded men hobbling on crutches or sporting eye patches and stitched fingers are often found gathered inside white tents at the refugee camps dotting the Turkish side of the border.

Said says he goes to the camps twice a month, resting up and eating while he visits relatives who fled the fighting in Syria.

At one camp, the 22-year-old fighter Youssef says he and his five friends, who were raised together since childhood and joined the rebels’ Free Syrian Army together last year, are resting while they scrounge for money from relatives or contacts abroad to buy them bullets to fight.

« You don’t need too many weapons, » he insists, « Enough for almost the whole unit. As soon as one person is martyred in the fighting, another person can take his gun. »

Inside the camp, young boys wage their own daily battle with Turkish security to pry openings in the fences around the camp for smuggling the rebels and their supplies in and out.

At his border post just miles away, the rebel Mohammed says he is not frustrated yet. He only hopes his fiancée, close yet far away, will wait for him.

« I hope she isn’t mad, I think she understands, » he laughs, rolling the silver engagement ring on his finger. « By God’s will, we’ll marry as soon as the regime falls. »