The destruction of moral order in Syria – by Haid Haid

Sustainable peace in Syria will require not only the cessation of violence, but also the changing people’s narratives and mindsets to view their opponents once more as humans with similar rights and values

On April 28, a group of Syrian Democratic Forces (SDF), a Kurdish-led alliance against ISIS, displayed the bodies of rebels on the streets of Afrin, a Kurdish city in northern Syria. On May 12, rebel fighters took a picture standing on top of three dead bodies in Al-Zara, an Alawite town in Hama’s province. On May 16, a prominent Syrian army commander posed for a picture in front two hanged bodies torn in half behind him in Deir Ezzor. The conflict in Syria has created the conditions necessary to systematically construct the “other” as an enemy and a legitimate target for violence. Furthermore, the dehumanizing of the “other” has reached a new level in which celebrating the death of other fighters from rival groups has become more morally acceptable. This development is alarming, as it increases the risk of widespread intercommunal conflict, on the scale of mass atrocities, occurring in Syria. 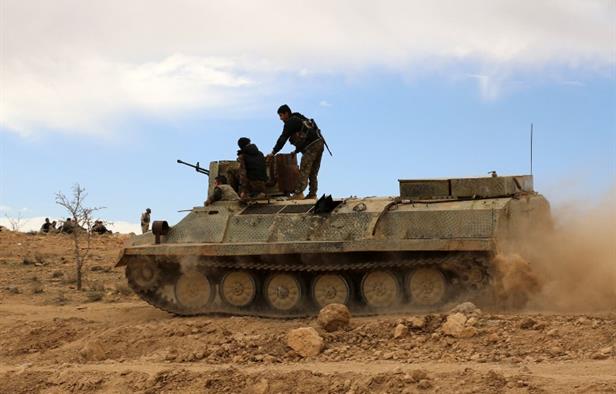 Fighters from the Syrian Democratic Forces (SDF) sit atop an armored personnel carrier on the outskirts of the town of Al-Shadadi in the northeastern Syrian province of Hasakeh, on February 19, 2016. (AFP/Delil Souleiman)

The methodical killing in Syria has not only become an accepted practice over the past few years but also an existential necessity to protect “us” from “them”. The excessive use of force by the Assad regime against the peaceful Syrian demonstrators since March 2011 and the failure to protect Syrian civilians created a suitable environment for violence. The Assad regime has also been systematically establishing a societal division between his supporters and his opponents to regard the latter as enemies. Dehumanizing the opposition excluded them from the customary moral code governing the rest of the Syrian society and legitimized killing them. According to social psychologist Terrel Northrup, dehumanization makes violence more tolerable, as it is easier to harm something or someone viewed as not human or inhuman.

Although dehumanization was main employed by the Syrian regime during the early stages of the conflict, it has become common practice for most armed groups in Syria. In the above mentioned three incidents, the perpetrators used negative labeling to portray their enemies as outsiders and justify their inhuman actions against them. When 40 to 50 rebel bodies were displayed on the bed of truck driven by SDF fighters through the street of Afrin, residents of the town were filmed running behind the truck, examining the bodies and cheering on the soldiers. The dead rebels were referred to as jihadists and extremists. During the Al-Zara incident, rebel fighters referred to the dead in their picture as shabiha(pro-regime thugs). The prominent Syrian army commander claimed that the hanging bodies behind him were former ISIS members. In all these incidents, terms were employed frame their dead enemies as inhuman.

Such practices are not limited to the three incidents or groups mentioned here. Other groups including ISIS and Jabhat al-Nusra have systematically filmed and circulated videos of a similar nature. Syrian state TV reporters have also posed in photos next to the dead bodies of regime opponents. For example, pro-regime reporter Kenana Alloush took selfies in front of the bodies of dead rebels in Aleppo on May 11. However, official reactions from the groups committing these inhuman actions have varied from cheering the acts to rejecting them. Neither the Syrian army nor state TV has published any public statement condemning the actions of their employees. On the opposite end of the spectrum, Sharvan Darwish, a spokesperson of the Syrian Democratic Forces, said in a statement that what happened in Afrin doesn’t represent the principles and morals of the group and that they must not slip into such behavior.  The rebel group responsible for the other incident also published an official statement condemning the actions of its fighters and promising to hold the perpetrators accountable so similar actions would not be repeated.

These incidents have led to widespread criticism from Kurdish and opposition groups and communities. However pro-Assad communities have not openly criticized the actions of the military officer or the reporter. “I am against such actions because they don’t represent me, but I wasn’t able to criticize them publically. I might be considered a traitor for criticizing the army,” said Nour, a Syrian teacher based in Damascus and a supporter of Assad. Although fear plays a significant role in minimizing criticism within communities supporting Assad, the deep polarization of the conflict also contributes to making pro-Assad groups increasingly unable to recognize a shared humanity with their enemies. This makes the situation different from most opposition groups where members and supporters are still trying to counter the dehumanization attempts of their enemies by refusing to exclude them from the customary moral code governing conflict. Nonetheless, these communities are at risk of losing their empathy if the violence in Syria continues.

The social and psychological distancing between the warring groups will not end with the cessation of the armed conflict. A collective reconciliation process will be needed to repair the breakdown of societal relationships between communities. Armed conflict divides communities by undermining interpersonal and communal group trust and destroying the norms and values that motivate cooperation and collective action for the common good. Over time, different groups develop their own selective memories that make the « others » responsible for their tragedies, which makes it difficult to build a peaceful future with them. Therefore, reconciliation and sustainable peace in Syria will require not only the cessation of violence, but also the changing people’s narratives and mindsets to view their opponents once more as humans with similar rights and values.

Moving toward reconciliation and sustainable peace in such deeply divided societies, like the ones in Syria, require post-conflict peacebuilding strategies that repair the social and psychological divisions fueling collective violence. The longer such strategies are delayed, the harder it will become to bring Syrian communities back together.

Haid Haid is a Syrian researcher who focuses on foreign and security policy, conflict resolution and Kurds and Islamist movements. He tweets @HaidHaid22