The Forgotten Ones in Syrian Jails for Decades – Adnan Kassar 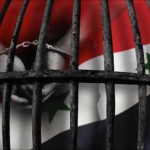 Without lawyers or fair trials, and without knowing their destiny, political prisoners languished in Syrian jails for many years. About 1500 of them were deported from Saidnaya prison to other prisons last July; and yet the regime still denies their very existence.

The Syrian authorities misled the Arab observers and prevented them from meeting the prisoners during their visits to the jails. One a former prisoner was given a card claiming that he was sentenced to life imprisonment (25 years), although his detention period exceeded that, and the observers’ committee was not allowed to meet him.

Tarek al-Ghorani was arrested in the middle of the last decade for more than 5 years because of his dissident activities on the internet and he left prison with a memory full of painful incidents. He spoke to Aljazeera.net about his mates’ stories who still live under the continuous fear of death.

Al Ghorani (31 years old) says that his mate Yacoub had spent 5 years in solitary confinement in Mazzeh’s prison awaiting his execution every day. Meanwhile he used to watch the executions through a spyhole in the door and hear how necks were being broken, while waiting for his turn to come.

The oldest prisoner Raghid Ahmad al-Tatari has been in detention since 1981 and was lately moved to Adra prison. He was a military pilot before the pilots started running away in the eighties and he was detained just because of suspicion of his involvement in the escape of two fighter jets to Jordan.

One of the strangest stories, narrated by al-Ghorani, was the story of the detention of jockey/equestrian Mohammad Adnan Kassar because of a horse race in 1993 where he defeated Basel al-Assad, the eldest son of Hafez al-Assad. When Basel died in a car accident the following year, Kassar was tormented with even more torture in Palmyra prison.

Al-Ghorani says that Kassar was one of the deposits left by Basel al-Assad in prison and his case became complicated following the death of the later, just like others who were left in prison by al-Assad the father and became forgotten in prisons after his death.

Another forgotten person is Walid Ayoub Barakat, born in Jerusalem and detained since 1982. Al-Ghorani says he was traveling on a plane heading to Beirut and the plane had to land in Damascus due to the Lebanese civil war, and he was detained and sent to the prison.

Al-Ghorani also mentions the Palestinian Bashar Said who has been detained since 1985. He is from Jenin, one of those who moved to Syria to cooperate with the resistance factions, but according to him his dispute with the Secretary General of the Popular Front for the Liberation of Palestine – General Command, Ahmed Jibril, caused his detention and field trial.

Around 1400 prisoners jointly suffer under bad prison conditions and torture. Al-Ghorani says many of them died because they were not given treatment or did not find enough water.

The field trial is nothing more than the prisoner standing for a few seconds in front of the judge who reads his name, swears at him and then walks away, leaving the prisoner clueless about his case or the period of his detention, so he lives on the hope that every 5 years he might get a chance of being released.

Al-Ghorani mentions that “Generals Sulaiman al-Khatib and Hassan Kakaa from the 9th brigade held these trials, and executed thousands in Palmyra prison in the eighties”. He demands holding fair trials based on evidence rather than suspicion.

His opinion is that holding these prisoners for so many years is linked to a cover-up of the fate of prisoners who were executed following field trials in Palmyra prison and whose death was not registered in the civil records. Moreover, their families do not know whether they are still alive or not, therefore, keeping some of them forgotten in prisons would leave the door open to all possibilities.

Al-Ghorani ends his talk to Aljazeera.net by appealing to human rights organizations to support the cases of those persons hidden for so many years and reveal the destiny of thousands of prisoners who were executed; as their families have the right to be assured of their death instead of holding their lives on false hopes for many decades.

It is worthwhile to mention that the State Security Court is an emergency court with secret hearings, its sentences are considered final and not subject to appeal; it was abolished just after the beginning of the Syrian revolution along with the Emergency Law. Lawyers and activists confirm that field trials are still being held in Syria in a worse manner.