Description : Yassin al-Haj Saleh is a leftist dissident who spent sixteen years as a political prisoner and now lives in exile. He describes with precision and fervour the events that led to Syria’s 2011 uprising, the metamorphosis of the popular revolution into a regional war, and the ‘three monsters’ Saleh sees ‘treading on Syria’s corpse’: the Assad regime and its allies, ISIS and other jihadists, and Russia and the US. Where conventional wisdom has it that Assad’s army is now battling religious fanatics for control of the country, Saleh argues that the emancipatory, democratic mass movement that ignited the revolution still exists, though it is beset on all sides.

The Impossible Revolution is a powerful, compelling critique of Syria’s catastrophic war, which has profoundly reshaped the lives of millions of Syrians.

Author : Yassin al-Haj Saleh is widely regarded as Syria’s foremost thinker and the intellectual guru of the Syrian uprising. Born in Raqqa, he spent sixteen years as a political prisoner in Syria (1980-1996) and has been living in exile in Turkey since 2013, still struggling for Syria and Samira, his abducted wife. He has written and edited five books in Arabic, but this is his first in English.

Reviews : ‘Reading The Impossible Revolution, a Western audience has the opportunity to eavesdrop on the conversation that has been going on between Syrians since the beginning of the conflict … If Saleh had been read by Westerners at the time of his writing, for example, ISIS would not have come as such a surprise.’ — Times Literary Supplement

‘A searing and heartfelt critique of a crisis which is no longer just Syria’s, but the world’s. Born in Raqqa and imprisoned under the Assads for sixteen years, Yassin al-Haj Saleh is now recognised as ‘the conscience of the Syrian Revolution.’ No other voice has such clarity or integrity.’ — Diana Darke, author of My House in Damascus: An Inside View of the Syrian Crisis

‘Saleh is one of Syria’s most important contemporary political theorists and public intellectuals. Since the start of the Syrian uprising, Saleh’s influence and his role as an incisive critic of extremism, dictatorship, and the effects of mass violence on Syrian society have offered powerful and compelling responses to the traumas that define the contemporary Syrian experience.’ — Steven Heydemann, Professor of Middle East Studies at Smith College and the author of Authoritarianism in Syria: Institutions and Social Conflict, 1946-1970

‘Saleh takes us on a personal journey through the ecstasy and the heartbreak of Syria’s revolution and the many struggles the country has faced since. Syria’s revolution began as an organic peaceful movement seeking simple and reasonable goals, but as Saleh explains, it soon spawned conflicting, violent and dangerous complexities that sadly now dominate public discourse and on-the-ground dynamics. There is no better voice to tell this book’s many important stories and Saleh’s words are likely to live on for years to come.’ — Charles Lister, author of The Syrian Jihad: Al-Qaeda, The Islamic State and the Evolution of an Insurgency

‘The appearance of Yassin al-Haj Saleh’s work in English has been long awaited. It’s vitally important to listen to Syrian voices on the events which are happening in their country. Yassin is one of Syria’s most engaging revolutionary thinkers, and he provides valuable context to a democratic revolution and vicious counter-revolution which has often been wilfully misunderstood by commentators in the West. Expert analysis and powerful personal testimony are interwoven in this book which is indispensable for anyone wishing to further their understanding of the Syrian tragedy.’ — Leila Al Shami, co-author of Burning Country: Syrians in Revolution and War 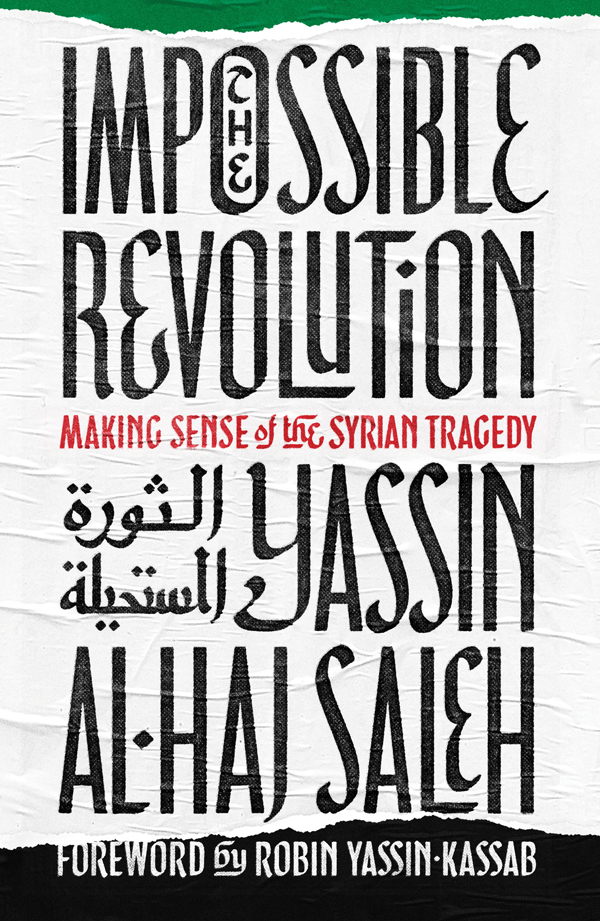