The killing fields – by the Economist

Despite the huge risks involved, the time has come for the West and the Arabs to intervene in Syria 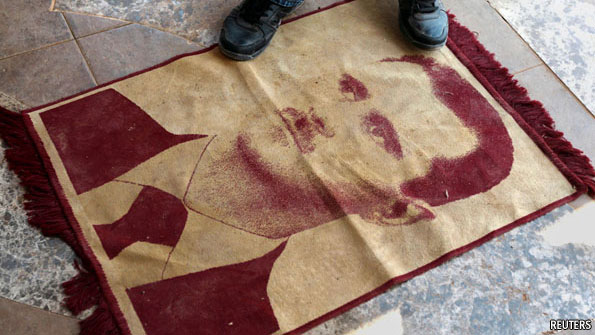 IS IT because America and Europe have tired of their own wars that they have started to turn their back on other people’s? The number of dead in Syria has passed 30,000. Some days over 250 bodies are added to the pile, which brings to mind Iraq at the insurgency’s peak in 2006-07. Were the next few months to stretch into years, as now seems likely, Syria’s great cities would be ground to rubble and the whole Middle East would choke on the dust.

To prevent this catastrophe, NATO needs to start making the humanitarian and strategic case for intervening in Syria. Grounding President Bashar Assad’s air force could save many thousands of lives. Giving the rebels scope to organise and train could help bring the war to an end. Speeding the fall of Mr Assad might give Syria a chance to re-emerge as a nation at peace with itself and its neighbours.

Nothing argues for intervention more forcefully than Mr Assad’s brutal tactics. From the beginning, when his troops fired on peaceful demonstrators, he has used extreme violence. A combination of impunity and desperation has led him to graduate from heavy weapons to aircraft, helicopter gunships and now cluster bombs. The fury of the assault against civilians in Damascus and Aleppo, Syria’s two main cities, explains why the death toll is now mounting fast. Such violence breeds implacable hatred, and so the rebels will fight on.

And lastly, Mr Assad is destabilising the region. By enlisting the support of Russia and Iran, he has laid the ground for an interminable proxy war in which Turkey and some Gulf states back the rebels. His forces have traded potshots with Turkey. Refugees are pouring over Syria’s borders. In Lebanon Hizbullah is being sucked in. Militant nationalism is growing among the Kurds (see article). And sectarian tension is rising in Iraq: the Shia-led government supplies Mr Assad, and rebellious Sunnis, including the rump of al-Qaeda, back his opponents.

Syria is facing a long, violent, sectarian civil war that will claim tens of thousands of lives, leave chemical and biological weapons unsecured and destabilise a region of paramount strategic importance. That is something the outside world has both a duty and an interest to prevent. But even if intervening now is the least bloody option, it will still be bloody.

In strictly military terms, the mission is feasible. NATO could enforce a no-fly zone over Syria. It is possible that the mere threat of destroying any airborne Syrian aircraft would keep Mr Assad’s planes on the ground; but America’s military planners might insist on destroying Mr Assad’s air defences anyway (harder than last year’s campaign against Libya, but still possible). The bigger worry, however, is what would follow the establishment of a no-fly zone.

Even if the aim is to protect Syrian civilians, intervention is a slippery slope. It would probably rapidly become a policy to overthrow Mr Assad. Nobody can say how long he would fight on. He would struggle without air power—especially if he lost the full use of his tanks and heavy artillery. Perhaps, sensing the hopelessness of their cause, his own officers might mount a coup. If not, the rebels would probably take many months to force him out. That would test the West’s resolve, but it would be better than a war of attrition lasting years.

And nobody can be sure who would replace him. The rebels have promised to unite, but their squabbling has been exasperating. The men with guns, who are most likely to take power, represent lots of militias, some of which can muster only a few dozen fighters. That argues against giving the rebels advanced weapons—because missiles that can destroy airliners could end up in extreme Islamist hands. But a no-fly zone would give the rebels space to organise and train. The briefer the conflict, the greater the chance that the militias who toppled Mr Assad would be commanded by moderates who are sympathetic to the West and want to put Syria back together.

Today, few are prepared to speak up for intervention. That is partly because of its undeniable risks. But it is also because the Americans would have to lead the operation and, with an election to campaign for, Barack Obama has gone out of his way to avoid talking about Syria. Yet America has every interest in a more stable Middle East, in being seen to defend values that it holds to be universal and in denying Iran an important regional ally. Even now, Mr Obama should be working on plans for how he or a President Romney could intervene.

The chances that the West could get backing in the UN Security Council are slim, because Russia would stand in the way. But an American-led coalition could invoke the world’s responsibility to protect citizens against their own abusive governments through a vote in the UN General Assembly—which would provide diplomatic, if not legal, cover. Most important is to win at least tacit Arab backing, especially from Egypt’s president, Muhammad Morsi, who has called for Mr Assad’s fall, though he has yet to accept the need for outside force. Most Arabs bear no love for Mr Assad—and are increasingly critical of Russia. So long as there is no invading ground force (and there won’t be), they will probably fall into line.

We do not call lightly for the world to undertake such a risky operation. But the stability of the Middle East and countless Syrian lives should not be hostage to Russian obstinacy. As the conflict drags on, month after bloody month, calls to act will mount—as in Kosovo 15 years ago. The sooner the world intervenes, the more lives can be saved, and the greater the chance that Syria can be made whole again.