The Maddening Maze of Getting A Syrian Passport Abroad – by Shawn Carrié, Rami Zayat

A Syrian passport once cost $9 and took only a few hours to issue. As the Syrian conflict enters its seventh year, Syrians in Turkey are paying up to $2,000 and waiting for months to get one of the world’s weakest passports.

ISTANBUL – In the summer of 2012, before violence gripped northern Syria, Zouhir al-Shimale walked into a government office in Aleppo at 9 a.m. and walked out six hours later with a Syrian passport valid for five years. All he needed back then was a document showing his military conscription statusand about $9 (1,930 Syrian pounds).

Like many Syrians whose lives have been upended by the six-year-long conflict, 25-year-old media activist Shimale has since emigrated to Turkey and his Syrian passport is now expiring. But the process of renewing has already taken more than five months and is slated to cost him thousands of dollars.

Shimale is only one of around 3 million Syrian refugees in Turkey, many of whom have or will eventually have to navigate the confusing and costly maze of obtaining basic documents from the only Syrian consulate in the country. What’s more, a recent government bill further complicated the procedure and significantly raised the cost, creating a booming underground black market for third-party consular services. 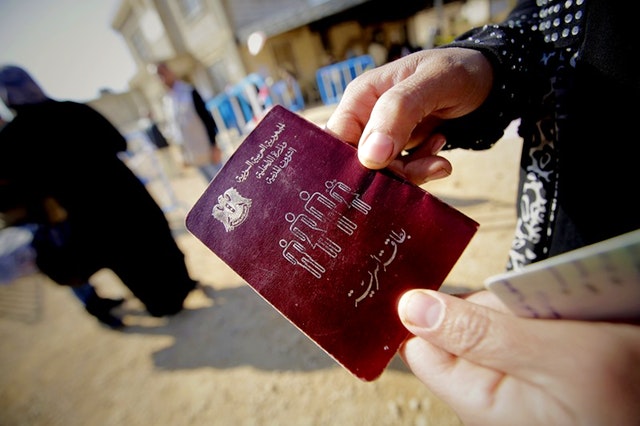 A Syrian woman shows her passport as families, who fled recent violence in the mountainous Qalamoun region, wait to be registered by the United Nations High Commissioner for Refugees (UNHCR) on November 19, 2013 in Arsal in the Lebanese Bekaa valley.AFP/JOSEPH EID 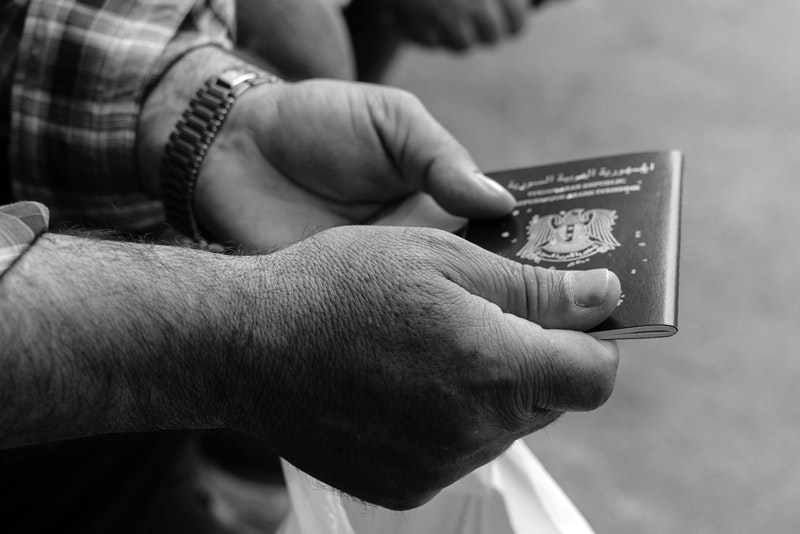 A Syrian man holds his passport outside the Syrian consulate in Istanbul on May 4, 2017 (Shawn Carrié)

“It feels like being deaf at a loud party, You never know what’s going on in this place,” the media activist said, referring to the consulate, which is housed in an inconspicuous apartment building at the quiet end of a busy shopping district in Istanbul.

Syria Deeply spoke to three Syrian refugees trying to obtain a new passport in Turkey. Their stories highlight the bureaucratic nightmare that is getting one of the world’s weakest passports.

Hundreds of Syrians who fled their country without papers frequent the consulate every day, seeking to obtain the official proof of identification they need to secure work, housing and healthcare. A passport is the only original identification document an expatriate Syrian can get, and the Syrian consulate is the only place to get it.

The standard procedure involves first getting an appointment to confirm one’s identity as a Syrian citizen and request permission to apply for a passport. This preliminary step involves a full security and background check from the Syrian Interior Ministry – a daunting prospect for the sizable number of Syrian men who have evaded military conscription. 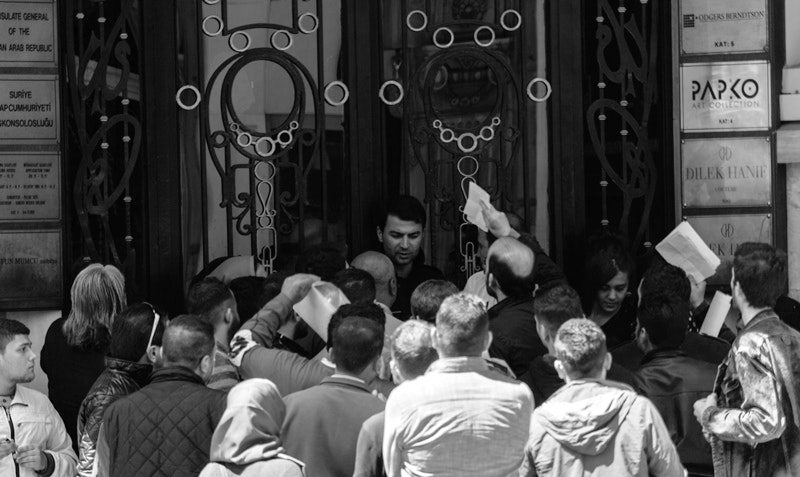 Syrians waiting for an appointment outside the gates of the Syrian consulate in Istanbul, Turkey on May 5, 2017 (Shawn Carrié)

After these initial screenings, it takes another 45 days to get a response to the passport request. If accepted, submitting the application and providing the necessary personal details requires another appointment. A passport is usually issued 45 days after this final interview.

Overall, it should take an average period of three months to obtain the passport after the first screening.

While some may be able to afford the wait, a more pressing issue is the hefty cost of acquiring official identification. The cost of the entire process in Turkey starts at $330 – more than a five-month salary for an average public employee in Syria – and can go up to $830 if an expedited passport is requested.

Until recently, Syrians could opt for a simpler, albeit more expensive, option. Rather than obtain a new passport, they could apply for a two-year extension. The process does not require the dreaded security screening, but costs an additional fee of $200.

However, in March, the Syrian government stopped issuing passport extensions – in line with new regulations issued to its consulates in Turkey, Jordan and Kuwait. It is unclear why the new regulations were applied to some consulates and not others.

The result, however, was that people rushed to apply for brand-new passports all at once since their extension applications would no longer be valid.

For al-Shimale, who had already spent months trying to get his passport extended, the new regulations meant that he had to start the process all over again – but this time around, the rules had changed completely.

The website of the Ministry of Foreign and Expatriate Affairs bears a warning: “Appointments must only be booked through the website, do not deal with any third party to book appointments.”

But the innocuous-looking calendar for selecting an appointment date presents a Kafka-esque puzzle: The rising number of requests in the wake of March’s new regulations made booking an appointment online a near impossibility.

Al-Shimale says he tried for weeks, visiting the page every night at exactly 1 a.m. – when new slots would open – to check for availability. But every time he tried to select an appointment, he was confronted with the same message, displayed in bold red: “You cannot book an appointment, try another day.”

The activist said he soon found out that the quickest way to get an appointment with the Syrian consulate is not through the official website, but through a third-party “fixer.”

A quick search in Arabic on social media shows dozens of public offers for a whole range of consular services, from passport appointments to notarizing legal documents, even courier services to drop off paperwork. Although it is common for consulates to outsource some services to third-party companies for convenience, in the case of the Syrian consulate, unofficial fixers have developed an effective monopoly over consular services.

All the applicants who spoke to Syria Deeply said that they paid a fixer, on average, a fee of $100 for each appointment they scheduled. At least two appointments are required in the consulate before obtaining a passport. This means that they would need to pay the fixer $200 for the process, in addition to paying the standard passport fees to the consulate. In one case, however, the fixer’s fees went up to $300 per appointment because of high demand in the aftermath of the new regulations. 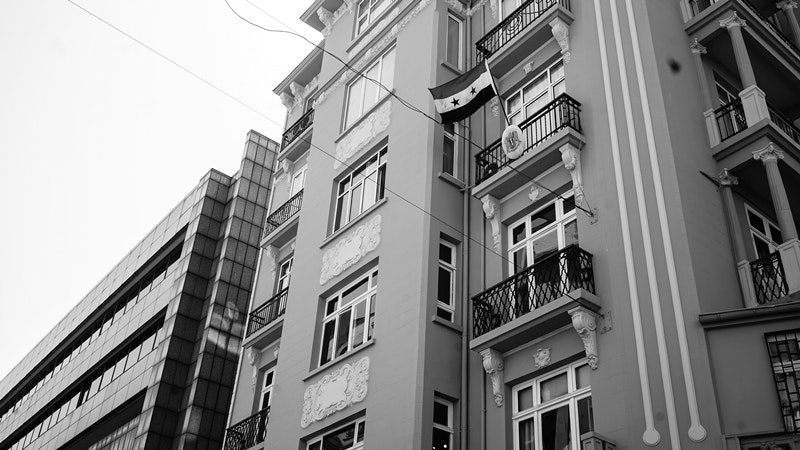 The flag of the Syrian Arab Republic flies over Syria’s consulate in Istanbul, Turkey on May 4, 2017 (Shawn Carrié)

“The website is like a curtain on a stage,” one fixer who asked to be identified as Mohammad S. told Syria Deeply. Fixers who have a second- or third-degree connection with someone in the consulate are the actual, albeit unofficial, channel for appointments, he said. Mohammad S. said he charges $100 to fix a passport appointment, but only does it for people who come to him with a reference, mostly friends of family members.

According to Mohammad, these third-party fixers pass the names and national identity numbers of applicants to a staff member in the consulate who will then input bookings directly into the online database.

With the rush of new applications, he says that fixers are raking in the cash – and the consulate’s staff are in on the racket.

“The people in this circle are taking the money and sharing it with someone above them. This is how everything works in Syria,” Mohammad, who has also made money of out this black market, says.

Another fixer, who asked to be identified as Ahmad K, corroborated Mohammad’s statement.

Ahmad, who says he operates as a full-service proxy for the consulate, offers customers consular appointments and even provides them with an extra option to jump ahead in line for an additional $50.

“More applications means more cash for the Syrian government, and for the pockets of the consular employees,” the fixer told Syria Deeply.

Syria’s consulate in Istanbul could not be reached for a comment. Their phone lines were constantly engaged and a contact at the consulate said that consular staff were not permitted to discuss the issue.

Although it may be the easiest way to secure an appointment, using a fixer has its own hazards.

Al-Shimale says he was given a fake appointment by fixers three times. He would arrive at the consulate on the date he had been given only to be turned down by a doorman who said his name wasn’t on the list. In May he finally made his way through the consulate’s doors, but by then heightened demand had pushed fixers to inflate their prices to $300 for a “guaranteed” visit.

“I’m a Syrian citizen, and I lived under Bashar’s rockets and sieges, and now I have to go to his consulate, and there’s no alternative,” al-Shimale said.

Ahmed Primo, a 28-year-old media activist from Aleppo now living in Gaziantep, says it took him five months to register and get a passport for his two-year-old son. Between flights to Istanbul, hotels, consular fees and booking appointments each time through a fixer, he spent more than $1,000 for a procedure that would have cost $9 in Syria.

Too Much at Stake

Despite this maddening process, too much is at stake to forgo obtaining a passport. Without official proof of identification, Syrians in Turkey risk losing access to work.

For Zaher Said, a highly coveted Turkish residency permit is now on the line. 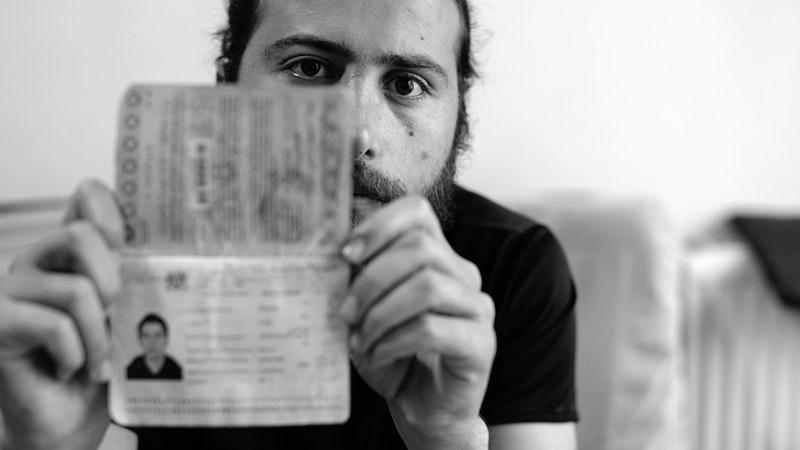 Zaher Said holds up his Syrian passport, which is about to expire, in his home in Gaziantep, Turkey on May 20, 2017. (Shawn Carrié)

Said came to Turkey in July 2011, after he was shot and injured during one of the first protests in Latakia. In 2015 he traded in his temporary refugee protection status for a two-year Turkish residency card – but now he can’t renew it without proof of identification. With his residency expiring this year, Zaher fears he’ll have to leave Turkey.

International treaties prevent him from being forced to return to Syria – but they don’t require Turkish authorities to let him stay, and travel options for Syrians are increasingly limited.

Zaher is lucky enough to have parents living in Damascus. Syrian law allows the mother or father of an applicant to submit a passport request on their behalf inside Syria. There is a catch, however. Rather than pay the standard $9 fee, an application submitted by the parents of a Syrian expat usually costs as much as a passport would in Istanbul – $330 for a regular passport and $830 for an expedited one. Zaher’s parents had to pay $830 to get the passport as quickly as possible and then send it to him in Gaziantep, he said.

But he still needs to get a stamp from the Syrian consulate in Istanbul for it to be valid to renew his residency in Turkey.

“My time is running out, it’s a window of only days,” Zaher told Syria Deeply. “I just hope Turkey gives me the time to deal with the regime,” he said.

Until then, Zaher is forced to wait in line with the rest of the crowd outside the consulate.

“I feel fed up with all these rules,” he says. “The regime … just wants to make money.”