The mounting human cost of the uprising in Syria

The mounting human cost of the uprising in Syria

SYRIA’S 18-month revolution-turned-war is taking an increasing toll on the population. When opposition fighters entered the capital Damascus and the second city Aleppo in July, President Bashar Assad’s regime responded with warplanes, and the monthly death toll jumped above 3,000. August was even bloodier. Civilians in Homs, the third city and the hub of the uprising for many months, have paid the highest price, but Damascus and its restless suburbs have seen almost as many deaths, as the map shows. The Centre for Documentation of Violations in Syria, which collects the data, also counts military fatalities on both sides. These have been fairly equal: around 2,730 opposition fighters and defectors have died, compared with just over 2,800 regime soldiers. And as many people have been detained during the fighting—around 28,000—as have lost their lives. Seeing a conflict set to get bloodier, ever more Syrians are deciding to leave. As of September 10th the UN High Commissoner for Refugees reckoned 250,000 had fled across the borders, while the UN Office for the Co-ordination of Humanitarian Affairs estimates that the World Food Programme and Syrian Arab Crescent Society are giving food aid to 1.5m people in the country, the majority of them internally displaced. The true figures for both are likely to be far higher, since many Syrians choose not to register as refugees, and in the country itelf hundreds of Syrians are huddled with friends and in mosques and churches out of the reach of aid. 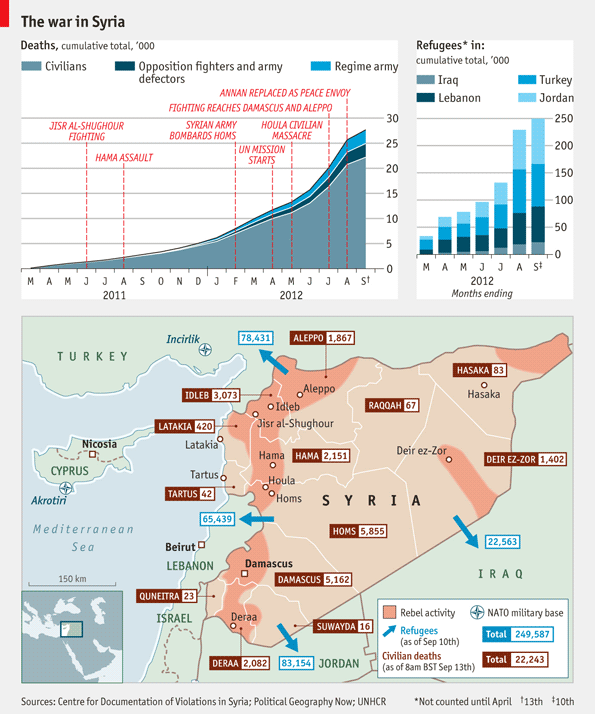