The rise of the Damascene Stickers – Nadia Hanna

This Saturday morning and after the celebration of the previous day, the residents of old Damascus, Kassa’a and the surrounding areas woke up to find their walls filled with stickers distributed by young activates from the area signed with the fish symbol as an indicator of their identity.   They declared with these stickers their refusal of the regime acts to celebrate at the end of each Friday and the provocation of a region on the expense of another in Damascus…throughout  the previous weeks several celebrations has been  set in the most important squares in Damascus and was focused in Bab Touma square with a sponsorship from several Syrian business men and the Syrian regime itself, and the concentration on this square comes from several factors, with its history and cultural relevance combined with some hidden factors related to establishing a sectarian feelings by driving the celebrations  in an area with a majority of Christian habitat at the end of a day were a mass human rights violations occurred all over the country.
From the beginning of the movement, the Syrian regime depended of the silence of the minorities, confirming their fears, trying to exhibit a sectarian situation to justify its existence… and while this game fooled a part of these minorities -especially throughout the interventions of some religion people ordered by the regime itself- there were other parts that refused these actions that aims to implicate the Syrians in a fight against each others, which this « Fish Stickers » campaign is part of. Although the sectarian impression exist in a way previously, some activates think that the latest events demolished all the impression of division in the Syrian society, depending on the high level of consciousness within the young Syrian generation recognizing that the bullets and capture dose not differ between citizens.
These « Fish Stickers » carried a specific message without convicting any part, by asking some  simple questions,  trying to follow the common logic without taking a political view by writing « Each Friday, many civilians, and military persons dies, do they deserve these celebrations?…we will not accept to dance on the blood of the people who sacrifice their lives »… confirming  their refusal to the celebrations acts as the country’s situation dose not allow these kind of celebrations from any part, where mentioning the  martyrs from the army forces represent the pro-regime  point of view, and demonstrate the state of contradiction they live in, where the official media announce a collective massacre news at the same time where it shows the celebration acts all over the city and billboards that says « Syria is Fine ».
This movement was not the first by the Syrian activates to declare their refusal of dictatorship and to encourage the Damascene scene to participate in the movement, where a group of young activates calling themselves « The Freedom Tsunami » distributed last week stickers all around Damascus city, make use of the hand logo used by the regime in its campaign and in the same design but in a twisted and sarcastic way to serve the revolution like « My way is your way…but the way is blocked by the tank », and other stickers scattered all around Damascus saying usual phrases like « People wants the regime down » and « Syria wants Freedom », and rumors about other manifests distributed around Damascus city … this situation has been tiring out the security forces to create a new way to bleed their strength and time in an addition to the protests, where a security zone established minutes after the news of the stickers announced, where cleaning unites with security forces tour the city to get rid of the stickers, this incidents embarrassed them in front of their management which consider it a major security brake, and threatening with cruel punishments..
Many think that Damascus has been not awaken yet to participate in the Syrian revolution…but Damascus has never slept since 40 years…and the Damascene people could hold dreams that will embrace  a revolt bigger than anything expected 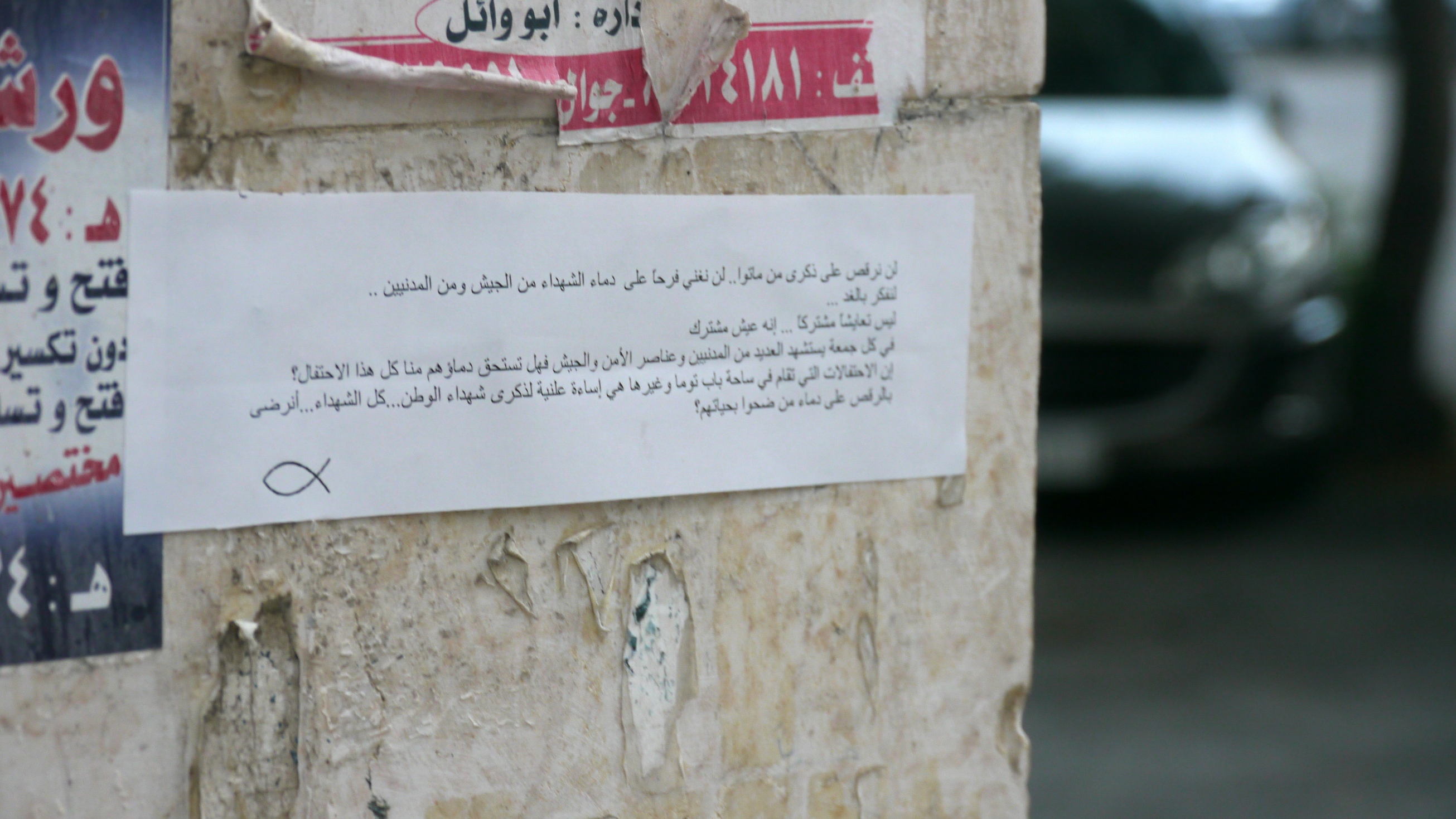