Syrian refugees in Lebanon are running out of space to bury their dead. Chloe Domat reports on Syrian refugees’ efforts to give their relatives a dignified resting place. 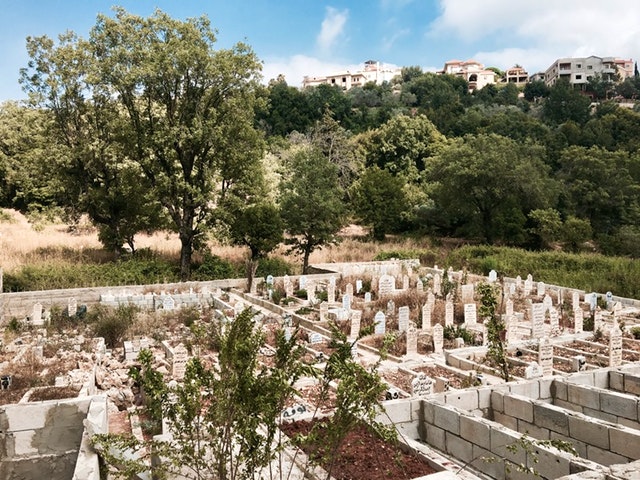 The Syrian cemetery of Daraya opened in January 2016. Chloe Domat

DARAYA, LEBANON – A cemetery for Syrians lies in the valley below the Lebanese village of Daraya. Large oak trees surround the graveyard, which smells of the herbal balm usually spread over the dead before funerals. Many of the graves are planted with fresh flowers.

At the end of a line of graves sits Abu Abdo, the man in charge.

Abu Abdo is not a refugee. He left Syria in 1993 to work as a plumber in neighboring Lebanon. He was well settled into his new life when war started back home. It seemed a distant tragedy, until he lost one of his own relatives in 2014.

“My aunt’s husband died here in Lebanon; he was a refugee. For several days we couldn’t find a spot to bury him,” he says. “The corpse started to smell. It was very difficult.

“This is when I came up with the idea of opening a cemetery specially for Syrians.”

With the help of a group of friends and a local NGO, he gathered enough money to buy a 16,145 square-feet (1,500 square-meter) piece of land in Daraya, the village where he lives, and opened the cemetery in January 2016. He has since buried 250 adults and more than 100 children, nearly all Syrian refugees from across Lebanon.

Syrians find out about Abu Abdo’s cemetery by word of mouth. Initially, he opened a Facebook page to market the graveyard, but he says the page was closed at the behest of Lebanese authorities. Now Abu Abdo receives requests for burials on WhatsApp. As the refugee crisis in Lebanon drags on, his business has grown. Funeral fees start at $150.

“I bury three to four people a week. I have about 100 spots left, then I need to get new land or bury people on top of each other,” he says. 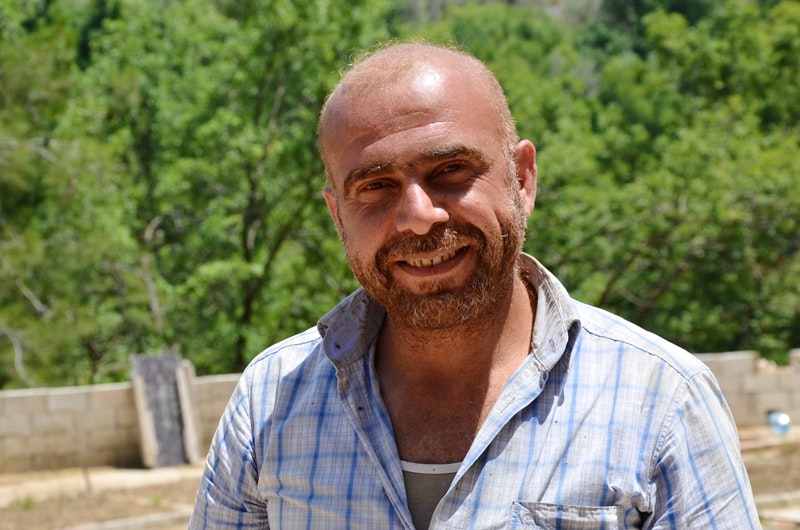 Abu Abdo bought a a 1,500 square-meter piece of land in his village of Daraya for the burial plots. (Chloe Domat)

The initiative has attracted criticism from local villagers. “Whenever I buy a loaf of bread or a kilo of meat, people say it is money from the dead,” says Abu Abdo, “but I’m not making a profit.”

The local NGO supporting the cemetery says international support has also been lacking.

“The land needed special rehabilitation and construction. We were promised help from numerous international organizations, but none came through,” says Ghassan Shehade, executive director of the Social Association in Chehim. “We only depend on the goodwill of our local donors and on our volunteers.”

More than 1 million Syrian refugees live in Lebanon. Many of their deaths go unrecorded, but local NGOs estimate that about 10,000 Syrian refugees die in Lebanon each year. The vast majority of them are Sunni Muslims, whose faith prohibits cremation. In a country about one-third of the size of Belgium, burial space has become a pressing issue.

At the beginning of the crisis, in 2011, Syrians were buried in local cemeteries alongside the Lebanese, but land rapidly filled up and prices rose.

Today, fees for a tomb in a Lebanese cemetery start at around $400. In cities, this price multiplies by 10, and in Beirut it can reach $10,000. This is a fee mostSyrian refugees cannot afford – few refugees are able to work, and years of exile have depleted their savings. Many families are forced to bury their loved ones wherever they can.

This was the situation for 22-year-old Azzam, from Homs, when his month-old baby died last year. The family, who live in a derelict Pepsi factory on the outskirts of Sidon in southern Lebanon, could not afford medication for their firstborn child. 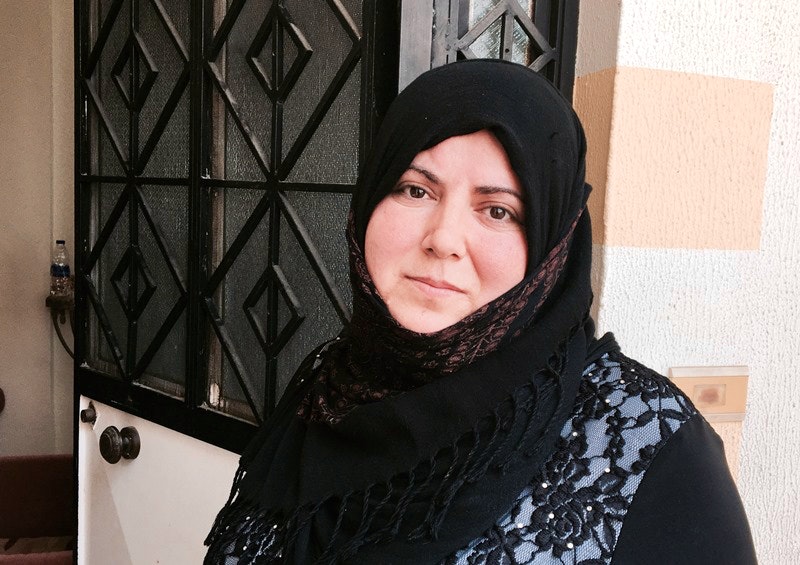 A 37-year-old refugee from Idlib, she tried to send her brother’s body back to Damascus.

“The cemetery asked for $400 to take my son. I didn’t have the money, so I was forced to bury him in the field,” he said. “I waited until it got dark so that nobody would see me. I could have been in real trouble.” It is illegal to bury someone outside an official cemetery in Lebanon.

Other refugees have resorted to sending bodies back to Syria, even though the roads aren’t safe and the smugglers rarely trustworthy.

When Rajaa*, a 37-year-old refugee from the Syrian province of Idlib, lost herbrother two years ago, she tried to send his body back to Damascus.

“The body was lost. We don’t know where it is.”

“I paid $400 to a smuggler. He took my brother’s corpse and disappeared. I called him many times but his phone was switched off,” she said. “That was it. The body was lost. We don’t know where it is. Did they give it to the dogs? Did they throw it in nature? Did wild animals eat it? We don’t know.”

The Right to a Burial

Under the Geneva conventions, refugees have the right to be buried in individual graves and according to their religions’ rituals.

Yet burial space is an issue for refugees across the world, ranging from the South Sudanese in Uganda to refugees in Calais in France trying to reach the U.K.

On Mediterranean coasts, new cemeteries have opened for the large number of refugees who die at sea. In Lesbos, Greece, a Muslim graveyard was created near the pre-existing Christian graveyard, and burial spaces for refugees have also been set aside in Italy’s Lampedusa and Tarsia.

But nowhere, perhaps, is it more difficult to allocate land for the displaced deadthan in tiny Lebanon, which hosts the highest number of refugees per capita in the world.

Adding to the challenges is the legal complexity of opening new cemeteries in Lebanon. “There is no legal or regulatory document governing the issue of cemeteries in general,” says Lebanese law professor Bechara Karam. “One must compile different laws and decrees that contain a few articles on the subject.”

Karima Houjair, project manager at Dar el Fatwa, the body responsible for Sunni “waqf” (religious property) in Lebanon, says, “Anybody can buy a piece of land and turn it into a cemetery, but before doing so he has to donate it to the waqf authorities of the municipality.”

In the northern region of Akkar, Nasr Alzhouri, a 58-year-old Syrian refugee from Homs, also tried to help his community part with their loved ones in a dignified manner.

He raised $40,000 from private donors to buy a 27,000 square-feet (2,500square-meter) piece of land near the Syrian border in Akkar. He donated it to Dar el Fatwa, and the cemetery opened in March 2017. It is now home to about 20 graves for Syrian refugees.

Another Syrian cemetery was opened by local organizations in Al Faour in the Bekaa region, where over 300,000 Syrian refugees live in harsh conditions. Afew months ago, the site reached its maximum capacity of 450 graves, but the groups have a new project under way.

“We are currently working on an initiative to establish a cemetery that can accommodate 800 graves within a 37,700 square-foot (3,500 square-meter) plot of land located in Central Bekaa,” says Haytham Taimey, founder of the Development and Regeneration Association, an NGO helping Syrian families find sites in local graveyards.

These Syrian volunteers and local NGOs are up against myriad legal challenges, as well as lack of interest from international donors, in their effort to bury refugees who die in exile.

Chloe Domat is a print and video journalist based in Beirut. She reports for international media, including France 24, Ouest France, Global Finance, L’Obs and Middle East Eye. She has a masters degree in international relations and journalism from the University of Sciences Po Paris and another one from the American University of Beirut in political studies. She speaks French, English and Arabic.