The Syrian revolution has changed me as a writer – Samar Yazbek

Samar Yazbek on how the relationship between her life and writing is now informed by reality, not fiction 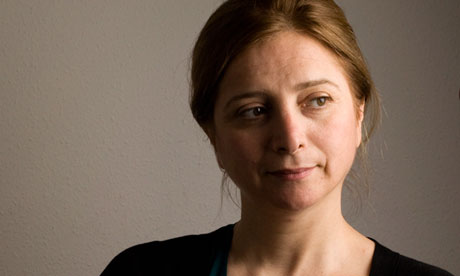 As the media reported the use of chemical weapons against the Syrian opposition, a picture taken by an activist from Ruqqah caught my attention. It showed a group of children who had fled Aleppo. There were six of them, each with wild hair and burnt skin – the side-effects of the chemicals. Their eyes gazed out at me hauntingly. How is the world not yet burning in shame to witness such a hideous crime?

Caught between the two worlds of exile and the rebel-controlled lands of northern Syria, I wonder about my own role in a revolution as challenging and complicated as that in my native land, now into its third terrible year. I am not in Syria, but neither am I outside; I am in no-man’s land, living my own revolution. Geography no longer means anything. My sense of time has become fluid as I move between airports and stations and the villages of northern Syria, escaping death in its daily pursuit, jolting between news of another massacre and my daydreams of the moment when Assad’s regime will fall. In the midst of all of this I have lost the person I used to be. Yet somehow I have found meaning.

As a writer it has not been easy to discover that the lives of those on the ground have become more important to me than fictional characters. For a long time my relationship with others was more observational than interactive. Now, the relationship between my life and writing is formed by the revolution.

I was with the revolution from the beginning, and I will stand by it until the end. I will expose its errors but I will not abandon it. For me, it is a testimony to the triumph of justice over oppression, the real-life expression of my own understanding of the concepts of ugliness and beauty.

On 3 March 2011, I was in Syria: I witnessed peaceful protesters being killed as they offered an olive branch to the regime, who responded with murder, bombings, torture and mutilation. I saw people protesting for justice, freedom, democracy, and the Shabiha militia, security forces and army responding by killing protesters, disfiguring their corpses, laying siege to whole towns. They made threats against the families of activists; they arrested doctors seen helping the wounded; they worked to sow enmity between people. They wanted to create their own anarchy. If soldiers refused to kill the protesters the security forces would get rid of them once and for all. They had no choice but to desert. I was witness to the fact that the revolution did not take up arms voluntarily.

I left Syria in mid-June 2011, having been discredited, persecuted, threatened and arrested. A year would pass before my return. I travelled between various towns and cities, speaking about the revolution, conscious of the regime’s prowess in manipulating the media, and its success in duping the world into believing that this was a war brought about by Sunni Islamists. I met with intellectuals, politicians and diplomats. They had little idea of what was going on. Most wanted to believe the story that it was a Salafist revolt. Their response was always that the minority groups in Syria were under threat – that the Christians and the Alawites would be in danger from the Sunni jihadis. This was not true; it was a monster they had created to scare themselves. What I saw on the ground told a very different story.

I had to return to Syria. Assad’s aircrafts were bombing bakeries, villages and farms. They bombarded civilians with explosives and sent a rain of poison down. In July last year I went back to the north, to the village of Banash, near Idlib. It was here that I saw the real Syria for the first time. The assault was continuous. Snipers were dotted throughout the rebel-controlled areas and Free Syrian Army checkpoints were all along the roads. There was scarcely any sign of extremist Islamists. In towns such as Saraqeb, the poetry of Mahmoud Darwish and Muthafar al‑Nawab and songs of love and struggle spread through the streets. The notion of a civil state dominated. The economic situation had deteriorated but was still bearable and sectarian tensions were not high. I travelled between the villages of the liberated north, hearing stories of death and heroism. I had conversations with various factions of the FSA, who spoke of a civil state even though many of them were Islamists. In August 2012, I was able to speak with a leading figure of the FSA and the tribal groups, discussing the state of sectarian relations and the importance of avoiding civil war. After my visit, my conviction in the revolution was stronger than ever. I came to understand what it means to die nobly.

Today, circumstances seem more desperate than ever. Not because of the daily massacres, the Scud missiles or the Mig helicopters; nor because of Syria’s transformation into a hell on earth, where people die every day as they wait in line for a scrap of bread, where Assad’s aircraft bombard the bread ovens so that the people will starve. And not because people are living without electricity, burying their dead by candlelight and, by day, resuming battle. Although these are tragedies, the real tragedy is that time is dragging on. I saw this in the eyes of the rebels I met – men armed with weapons and words who declared themselves ready to die for freedom, so others might survive.

Earlier this year, I visited the caves in Reef Idlib where Syrian civilians have fled to escape the shelling. There, I came to a muddy hovel and made my way down into a damp, dark cave. My guide was a woman carrying her young baby, with four other children clinging to her side. They were naked and hungry. At the side of another cave nearby was a girl of 16 who had lost a leg in a bomb attack. She was sitting on the dirty ground. The cave was not fit even for animals. The woman who had brought me there told me how her house had been destroyed; that they had moved to the caves to escape the bombardments, but the aircraft had followed and attacked them there. The people were hungry and sick, and the children lost and confused.

Two years after the revolution began I am touring the alleyways of Saraqeb with a group of young men counting their dead. Mig helicopters bombarded the town for two days straight. Yet, despite all of the pain and suffering, I say the same now as before: my heart is broken and I’ll never be at peace again, but I will not stop fighting Assad’s regime, no matter what the post-Assad future holds. Assad is a tyrant, a murderer and a sadist. Whatever is to come, it cannot be worse.

• Translated by Emily Danby. Samar Yazbek is a Syrian author and winner of the 2012 International PEN Pinter writer of courage award.