The U.N. chemical weapons report is pretty damning for Assad – By Max Fisher

The United Nations has released a report on its formal investigation into the use of chemical weapons in the Syrian city of Damascus. The report appears to strongly confirm that chemical weapons, including notoriously deadly sarin gas, were used against civilians in the Damascus suburb of Ghouta on Aug. 21. The investigation found that a disturbing 85 percent of blood samples and 91 percent of urine samples taken in the area tested positive for sarin.
While the investigation was barred from assigning blame, a number of details in the report seem to strongly suggest that the government of Syrian leader Bashar al-Assad was likely responsible. Here are a few:

1. Chemical weapons were delivered with munitions not used by rebels.
The report concluded that whoever blanketed the Damascus neighborhood in chemical weapons did it with a specific kind of artillery shell designed for delivering chemical weapons. (Isn’t technology grand?) The Syrian government is known to possess these shells. Syria-watchers say there is no evidence that rebels have ever used these munitions or even have access to the technology needed to launch them.

2. The sarin was fired from a regime-controlled area.
The report concludes that the shells came from the northwest of the targeted neighborhood. That area was and is controlled by Syrian regime forces and is awfully close to a Syrian military base. If the shells had been fired by Syrian rebels, they likely would have come from the rebel-held southeast. Human Rights Watch, which reached a similar conclusion, put together this map indicating where the shells came from: 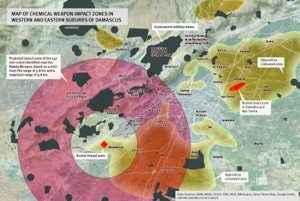 A map of the Damascus neighborhood shelled with chemical weapons. (Human Rights Watch)

3. Chemical analysis suggests sarin likely came from controlled supply.
The U.N. investigators analyzed 30 samples, which they found contained not just sarin but also « relevant chemicals, such as stabilizers. » That suggests that the chemical weapons were taken from a controlled storage environment, where they could have been processed for use by troops trained in their use. This would seem to downplay the possibility that the chemical weapons were, as some speculated, fired by rebels who had stolen them from government stockpiles.

4. Cyrillic characters on the sides of the shells
The Russian lettering on the artillery rounds strongly suggests they were Russian-manufactured. Russia is a major supplier of arms to the Syrian government, of course, but more to the point they are not a direct or indirect supplier of arms to the rebels. Rebels have typically been supplied with arms purchased from, most famously, Croatian manufacturers. The Croatian language uses a form of Latin rather than Cyrillic lettering.

5. The UN Secretary General’s comments on the report
This is perhaps the most circumstantial case at all, but it’s difficult to ignore the apparent subtext in Secretary General Ban Ki-moon’s news conference discussing the report. While he made it clear that the investigation was not charged with determining responsibility, and that he would not name a likely culprit, he acknowledged that « we all have our thoughts on this. » He certainly seemed to.
Ban repeatedly stressed that « there must be accountability » and « no impunity » for the use of chemical weapons, which he said constituted a « war crime. » He added that the « perpetrators … will have to be brought to justice » and suggested referring them to the International Criminal Court. While it’s possible that Ban meant for these comments to apply to rebel or regime perpetrators, his language and policy proscriptions would apply far more suitably to senior Syrian government officials than to informal rebel groups.