Five-year-old Omran Daqneesh, with bloodied face, sits with his sister inside an ambulance in Aleppo on August 17, 2016 CREDIT: MAHMOUD RSLAN/REUTERS

The indiscriminate bombing of Aleppo and other Syrian cities by President Assad and his Russian allies is illegal under international law. In accordance with the United Nations Responsibility to Protect resolution of 2005, the UN and its member states have a duty to prevent such war crimes.

However, we are constantly told that nothing can be done by the UN because Russia would veto action in the Security Council. Our sense of powerlessness has been made even worse this week by the sight of the Russian aircraft carrier Admiral Kuznetsov steaming towards Syria, possibly to wreak more carnage.

But there is a way out. We have been here before, in 1950, when Soviet vetoes blocked assistance to southern Korea after attack from the North.

Renewed airstrikes in opposition-held areas of Aleppo as ceasefire endsPlay! 01:20

To break the Soviet veto, Resolution 377A – “Uniting for Peace”– was passed, granting the UN General Assembly the power to convene an emergency special session and to override the Security Council on breaches of peace. It was not always directed against Moscow. Resolution 377A was used during the Suez crisis in 1956 to countermand the French and British veto, and has been invoked a dozen times in total.

So why isn’t Boris Johnson, the Foreign Secretary, seeking to create an international alliance – not just in the West but with the global south too – to use this mechanism to overrule Russia’s veto and secure a UN mandate for a no-bombing zone (NBZ) covering Syria and humanitarian corridors, civilian safe havens and peacekeepers?

Such consensus in the General Assembly would defuse the way the Syrian crisis is being seen as a stand-off between Russia and the West. The Putin and Assad regimes would be shamed and isolated. They’d suffer a huge morale blow, and be unable to pin the blame on the US and its allies. 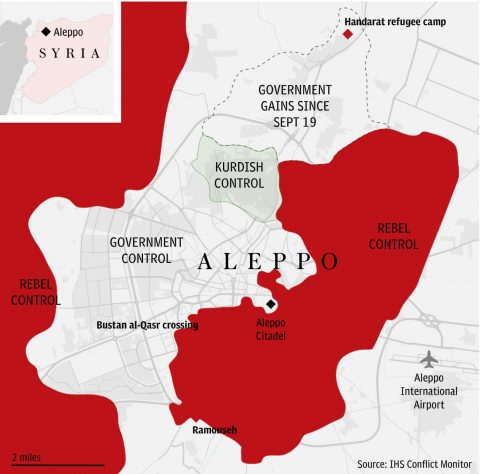 The key to saving civilian lives would be agreement on the NBZ. Nearly 1,000 of the 1,176 civilians who were killed in September died at the hands of Assad and Putin’s forces – mostly as a result of bombing – according to the Syrian Network for Human Rights.  Experts warn, however, that any NBZ would require 24-hour air patrols and, in the event of violations, the shooting down of Syrian and Russian planes – a major escalation between Russia and the West.

But a NBZ does not have to be like that. This is how it could work: if Syria or Russia defied the NBZ, there would be no retaliation against Russia. Instead, there would be carefully targeted attacks against Assad regime military assets, such as runways, aircraft and military intelligence and communications centres. The Syrian regime would pay the price for violations – a deterrent both to it and its Russian allies.

A NBZ would not require air patrols over Syrian territory. Countries such as the UK and US have the capacity to track aircraft in Syria from beyond Syrian airspace using satellites and spy drones, and to respond to NBZ breaches with guided missiles launched from outside Syrian territory – such as from the West’s own warships in the Mediterranean.

There would be a low risk of civilian casualties if the retaliatory strikes were restricted to attacking planes, airstrips and other military targets. It is true, of course, that enforcing the NBZ would probably result in some civilians being killed accidentally. But even Nato’s months of aerial attacks in Libya in 2011, which went beyond a NBZ and are not a model to emulate, resulted in only 72 confirmed civilian fatalities, according to Human Rights Watch (the real figure may have been higher but not hundreds, let alone thousands).

If civilians died as result of NBZ enforcement it would be desperately sad. But innocents are already dying in their thousands. So we must ask ourselves what is worse: an NBZ that could result in a low number of non-combatant deaths or the continuation of the current Assad and Putin bombing raids that have resulted in tens of thousands of civilian casualties?

By not pushing for a UN General Assembly mandate for NBZs, Britain and other countries are, by default, giving Assad and Putin a free hand to continue bombing civilian areas – a shameful stance for nations that espouse human rights. Let us put that right now.