Top Goon – Diaries of a Little Dictator: A revolutionary satirical puppet theatre webseries calling for funds to help it produce a second season 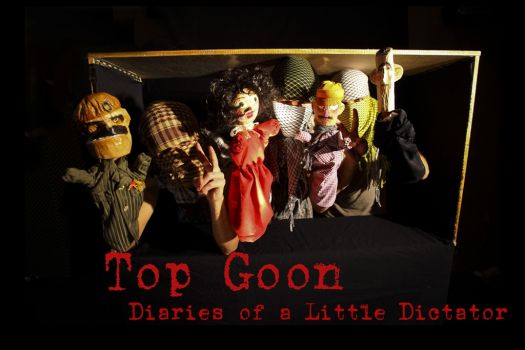 After 13 hugely popular episodes, the civil society group behind Syria’s most daring satirical theatre, Top Goon – Diaries of a Little Dictator, is calling for funds to help it produce a second season.

With more than 175,000 YouTube views; over half a million ‘likes’ through Facebook; broadcasts into Syria on opposition satellite channels, and write-ups in many of the world’s leading media – including the New York Times, Der Spiegel, El Mundo, Washington Post, and Al Jazeera English – the series is part of a creative revolution sweeping the Middle East.

Top Goon is a weekly web-based finger puppet show, broadcast in both Arabic and English on YouTube, which uses political satire, never before heard of or seen in four decades of the Assad family’s rule over Syria, to challenge one of the world’s last and most repressive police states, currently undergoing a revolution.

As the crisis in Syria enters a dangerous new phase of escalating violence by the regime alongside the emergence of an armed opposition, threatening to tip the country into civil war, Top Goon’s core message of peace and non-violence, and its use of humor and black comedy to foster democratic debate and reduce sectarian tensions, is now more critical than ever to Syria’s future.

The second season will look at Syria after the regime has fallen, the process of reconciliation and justice and the huge challenges of rebuilding the country and a civil state through the practice of democracy.

With its first series funded by personal savings of Syrian actors and artists either exiled or living in hiding and with several months of pro bono work by a camera and editing team, the group, which is called Masasit Mati, is no longer able to fund production costs and so is seeking funds.

Kickstarter funds will support the production of the second season,  consisting of 15 new episodes to be broadcast in June 2012.

Watch episode 1 from the first season:

Who is Masasit Mati?
The series is created by a group of around a dozen young Syrian and international artists who believe in peace and freedom. The group is called Masasit Mati, named after the straw used to drink Mati, a popular herbal tea in Syria now unavailable due to economic sanctions.
Seeking to contribute to the popular uprising in Syria through political satire and committed to peaceful regime change, the artists are from different backgrounds, such as acting, playwriting, sculpturing, scenography, costume designing, music and film making.
Alongside finger puppets made in Syria and smuggled out to a safe location for filming, the actors wear scarves to avoid being identified by the regime which has relentlessly targeted and injured or killed its opponents, including artists.
The Syrian artists work alongside a small group of international artists engaged with Syria who assist with technical and language expertise and in filming and editing the show to the highest standards.

Why we need funding?
The money will be used to pay for the production costs, including materials used to make new puppets, travel costs for the actors and crew, theatre hire, stage construction, camera hire, lighting, editing, upload and promotion. None of Masasit Mati will receive a salary from the funding.

Our Audience
Top Goon already has a loyal following through Facebook (http://www.facebook.com/masasitmati) and YouTube (http://www.youtube.com/masasitmati). Feedback has been overwhelmingly positive (see below) with many fans already asking when the next series will be out. There have also been some criticism and even threats of violence (see below), suggesting the show is reaching not only opposition audiences, but also Assad’s supporters.
With its second series Top Goon aims to broaden its audience base first inside Syria, through increasing its exposure via social media and in broadcasts on Arabic satellite channels. It is primarily within Syria that Top Goon can make most difference in pushing for peaceful change and an end to dictatorship.
But Masasit Mati believes Top Goon’s message of people power challenging the existing status quo, whereby a small minority of wealthy elites grow ever more rich and powerful at the economic and political expense of the majority, is a message that today resonates worldwide.
For that reason, Top Goon will not only continue to broadcast with English subtitles, but will also look to broaden its audience beyond Syria’s borders, through social, print and audiovisual media

Timeline
Masasit Mati aims to produce the second series of Top Goon to broadcast the first episode around early June. Please see the timeline below:

« Among the boldest works of art to have grown out of the unprecedented upheaval in Syrian society » — Global Post http://www.globalpost.com/dispatch/news/regions/middle-east/111212/top-goon-syria-puppet-show-bashar-al-assad »
« Sparked a backlash and has been widely praised » — Washington Post http://www.washingtonpost.com/blogs/blogpost/post/youtube-puppet-show-mocks-syrian-president-assad/2011/12/12/gIQAubl0pO_blog.html?socialreader_check=0&denied=1
« In Protests, Syrians Find the Spark of Creativity » — New York Times http://www.nytimes.com/2011/12/20/world/middleeast/in-uprising-syrians-find-spark-of-creativity.html?pagewanted=1&_r=4
« A surprisingly candid piece of political satire » — LA Times http://latimesblogs.latimes.com/world_now/2011/12/syria-revolutionary-puppet-series-bashar-assad.html
« The first 15 episodes of the satire were a hit. The battle cry of the puppet dictator – ‘I’m not crazy’- has become the oft-repeated slogan on Syrian Revolution forums. » — Der Spiegel  http://www.spiegel.de/politik/ausland/0,1518,810413,00.html

If you’re not sure how this whole Kickstarter thing works, check out their FAQ page.  If you have any questions at all about the project, about where your money will go, or if you have ideas or suggestions of ways to collaborate please get in touch.

International backers (outside the U.S. or Canada) please add $20 to help us with the cost of shipping for rewards that will be mailed.