Rising prices and lower incomes mean Syrian families are struggling to find the average 8,000 pounds a day to pay for meals during the holy month of Ramadan 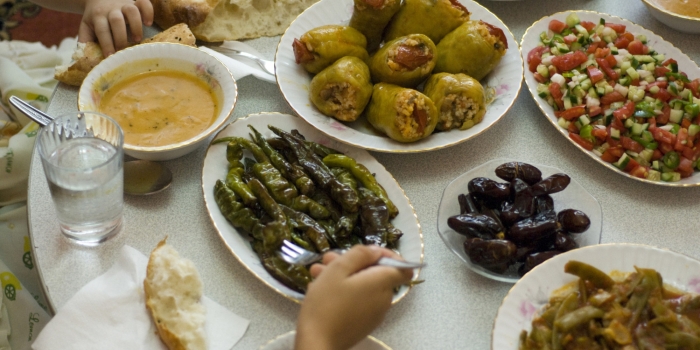 This year the arrival of Ramadan coincided with an unprecedented hike in market prices accompanied by a drop in available income, with some families claiming that tables this year are lacking most kinds of meat.

According to Al-Watan newspaper, Syrian families have estimated the cost of a medium-sized fast-breaking meal (iftar) to be around 6,000 Syrian pounds ($27), while the traditional Ramadan pre-dawn meal (suhoor) costs about 2,000 pounds.

Om Abdo, a housewife from Homs, said: « Today’s iftar is simply a few dates, french fries, fattoush salad and lentil soup. There is no dessert because the prices became extremely high after the price of sugar went up, » adding that her husband works as a painter, which means they do not have a steady monthly income.

Hama resident Om Hussein said that preparing a medium-sized iftar costs more than 6,000 Syrian pounds. She also said that suhoor meals are lacking key ingredients such as eggs and cheese.

A Syrian family needs around 8,000 pounds a day to prepare iftar and suhoor, and about 240,000 Syrian pounds for the whole month. The Syrian citizen’s monthly income is about 30,000 pounds; most pay about 20,000 SP for rent, leaving many to face difficult financial hardships and an increase in poverty.