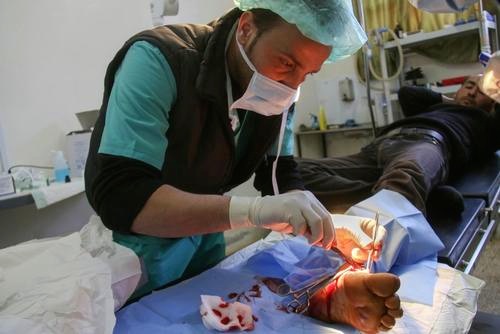 Syrian medical staff with Doctors Without Borders (MSF) discuss what it’s like working at Al Salamah hospital in the Syrian town of Azaz on the Turkish border.

AZAZ, SYRIA – “I had the opportunity to work in Germany but I refused,” says Thurayia Zein Al Abideen, a pediatrician at MSF’s Al Salamah hospital in Azaz district, northern Syria. “I want to work in Syria, because people need us and we are facing a huge shortage of doctors.”

Thurayia who has worked with MSF since 2013, is one of the nearly 150 Syrian staff who manage the hospital. It is the largest MSF medical facility still inside Syria.

Azaz district lies 20 miles (32km) northwest of Aleppo city, close to the Turkish border. The MSF hospital operates against a backdrop of constantly shifting frontlines and fighting among numerous armed groups, including the government of Syria, opposition forces, the so-called Islamic State group and Kurdish forces.

When operating at full capacity, the hospital provides outpatient and inpatient care, including maternity care. It has an emergency room, an operating theater, an X-ray department and a laboratory. A small team of international staff support the Syrian team from across the border in Turkey.

Azaz district was already home to thousands of displaced people before renewed fighting in February, and again in April and May, led to new waves of people arriving. Tens of thousands of people, including women, children and the elderly, arrived in the district, all desperately seeking sanctuary from the relentless conflict.

Today, an estimated 100,000 people are trapped in the area, caught between active fighting and a closed border with Turkey. The waves of displacement take place in an environment where attacks on civilians, including targeting of hospitals and medical staff, have become terrifyingly commonplace.

“The number of wounded people is not decreasing. On the contrary, it is increasing as frontlines around Sijo and Azaz area approach the hospital,” explains anaesthetist assistant Osama Haj Irhayyem.

As hospitals in the surrounding areas are bombed and medical staff flee, the MSF hospital – itself hit by machine gun fire in 2013 – has become one of the only options for people in critical need.

“You are shocked when you go to move the wounded people and you don’t know if you should take the serious cases or the simple ones. However, it is up to the medics to decide on that,” says Bakri Jallat, an ambulance driver. “What really broke my heart was a woman that I transferred to Bab Al Salamah, who gave birth in the car. This broke my heart more than blood, bombing or killing.”

“The most common problem amongst children coming to the hospital is wetting themselves due to fear of plane bombings,” continues Thurayia.

It is impossible to overstate the dedication and commitment of our teams inside Syria, many of whom had the opportunity to leave but decided to stay, risking their lives to be able to help people in need. Today, the majority of our staff are themselves displaced from their homes, some staying in or outside camps at the border, others sleeping in the hospital building itself.

Many had previously been displaced to Azaz district. “Because of the difficult conditions that we have lived through we moved here and brought our families. We left our villages,” explains Samir, a nurse.

Day in and day out under these unimaginable conditions, our teams work tirelessly to provide healthcare to their communities. To meet people’s need for medical care following the new waves of displacement from February onwards, the hospital increased its capacity, including raising the number of beds from 28 to 52.

At a peak in March we were seeing nearly three times the average number of people in our outpatient department, with 8,141 consultations compared to 2,811 in January, and carrying out nearly double the number of surgeries and ER consultations.

The hospital also increased its bus service that visits the camps and surrounding areas, bringing back people with medical needs. “People there live in very difficult circumstances, and the tents are in very poor condition, especially when it rains – Thurayia tells us. “We see mothers and children covered with mud, and we meet mothers crying in despair that their children are not recovering.”

It’s not just medical care. We also have a team dedicated to emergency response operating from the hospital. Since February, they have provided essential items including tents, blankets and hygiene kits to more than 54,000 people, as well as improving water and sanitation conditions for displaced people.

In April and May, as the security situation deteriorated, we had to reduce some of the activities and staff. A small “skeleton” team working around the clock did everything they could to continue providing medical care and emergency relief to people in need. At the end of May, as Islamic State group frontlines came as close as 1.9 miles (3km), MSF closed the hospital temporarily. Frontlines have now retreated somewhat, and the hospital reopened in June, but is still limited to emergency, surgical and lifesaving cases.

We hope to reopen fully soon, but for now the situation remains too unstable.

This article was originally published by Doctors Without Borders