US UN Ambassador: Tens of Thousands of Syrians Are Subjected to Violence & Inhumane Conditions in Assad’s Prisons 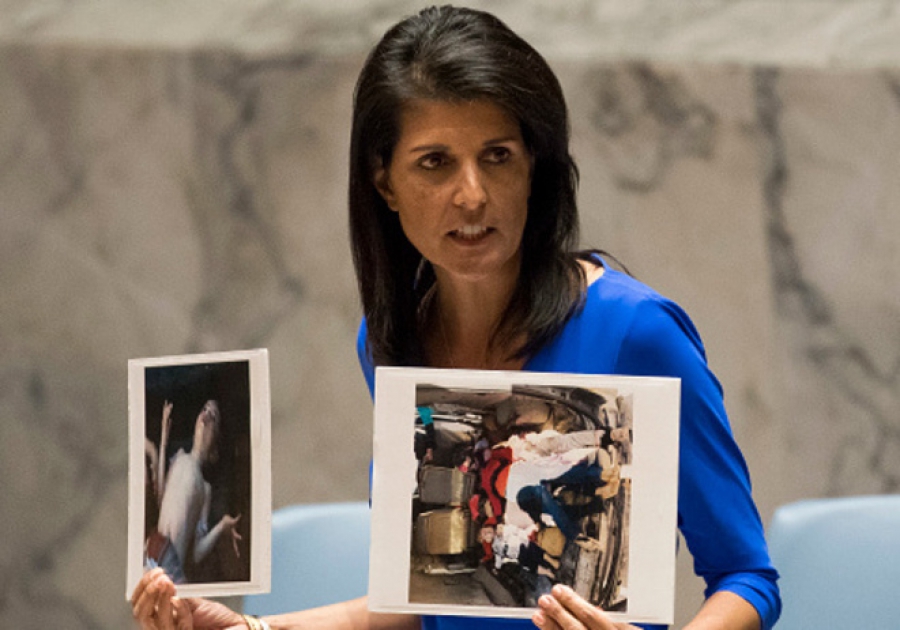 The Assad regime “continues to imprison tens of thousands of its people. It subjects them to such violence and inhumane conditions – including torture and sexual violence – that those who manage to survive suffer devastating and lasting damage,” United States Ambassador to the UN Nikki Haley said Tuesday.

Haley, who was speaking prior to a closed meeting of the UN Security Council on the Humanitarian situation in Syria, told the 15-member body that the Assad regime “continues to put up bureaucratic roadblocks to the delivery of life-saving food and medicine.”

“No one is fooled by the games they are playing. They are making the choice to starve their own people for political gain and are being supported by Iran as Russia looks the other way,” added Haley, who is back from a recent trip to Syrian refugees camps in Turkey and Jordan.

Pressing Russia to use its influence to end such atrocities, Haley said the bombing of hospitals and schools by the Assad regime continued unabated, adding that children who had survived awoke at night screaming and reliving the horrors they had experienced.

Stephen O’brien, Under-Secretary-General for Humanitarian Affairs and Emergency Relief Coordinator, said that despite reports of a significant drop in violence in some parts in Syria, the conflict continued to devastate civilians across the country.

Briefing the Council on the humanitarian situation in Syria, O’brien said that the war in Syria has extracted the worst toll on the country’s children. Tens of thousands have been killed and many have been forcibly detained, tortured, subjected to sexual violence, forcibly recruited and in some cases executed.

According to estimates, nearly seven million children are living in poverty and some 1.75 million are out of schools with another 1.35 million at the risk of dropping out. Almost one in three schools have been damaged, destroyed, or otherwise made inaccessible.

“And even if the schools were intact, many would be unable to open, with almost one quarter of the country’s teaching personnel no longer at their posts,” O’Brien said.

The UN humanitarian chief went on to say that the so-called “surrender” or “evacuation” agreements reached in some of the rebel-held areas had followed years of intense air strikes, shelling, and sniping aimed at making life intolerable and death likely.