War in Syria: Up to 40,000 civilians are starving in besieged Madaya, say campaigners – by Laura Pitel 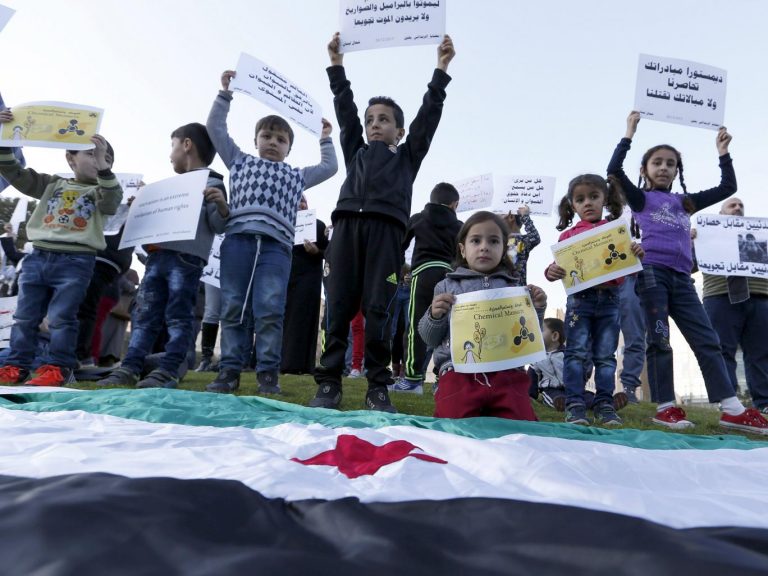 Children carry placards demanding that the siege of Madaya and Zabadani in Syria is lifted, in front of the offices of the UN headquarters in Beirut, Lebanon Reuters

Miles from the border with Lebanon, residents of a Syrian town are being forced to eat insects, plants and even cats after a siege lasting six months, hemmed in by land mines and Hezbollah forces.

Up to 40,000 civilians are slowly starving to death in the Syrian town of Madaya, activists have warned, after six months under a punishing siege.

Encircled by land mines and forces from the Lebanese militia Hezbollah, hundreds are suffering from malnutrition. With severe shortages of basic foodstuffs, many have resorted to eating wild plants, insects and even cats.

A media activist in the town, who used the pseudonym Nasir Ibrahim to protect his family, said that on New Year’s Eve he had managed to eat 50g of rice. Today, with snow covering the mountain-top town, he expected to go hungry. “The humanitarian situation is very dangerous,” he told The Independent. “Many have died starving and many more will follow them if no immediate aid is allowed in.”

In recent weeks, photographs of emaciated corpses have begun to emerge from the town, which is high in the mountains a few miles from the border with Lebanon. Around 20 men have so far perished from starvation, according to Mr Ibrahim.

One of the victims was Jamil Alloush, an elderly farmer who is said to have died shortly before Christmas. A picture circulated on social media shows his body laid out on a dismantled wooden headboard of a bed, that serves as a makeshift stretcher. His eyes are sunken into his face and his sternum sticks out sharply from his concave abdomen. His rib cage stands out starkly on his chest, with deep hollows between each bone.

Hussein Assaf, another activist, said that Mr Alloush was originally from the nearby town of Zabadani but was one of many civilians rounded up and forced into Madaya by members of Hezbollah.

He claimed that the Lebanese Shia militia, which has been fighting on the side of president Bashar al-Assad in the Syrian conflict, was effectively holding civilians hostage in order to gain leverage over two embattled Shia towns in Syria’s northern Idlib province.

The towns, Kafrayya and Fua, are besieged by members of the Islamist umbrella group Jaish al-Fatah, he said. One of its members, the Islamist group Ahrar al-Sham was among the groups that had been battling pro-government forces in the strategic town of Zabadani, which lies close to Madaya.

Mr Assaf claimed that, as part of its efforts to force the coalition to relinquish Kafrayya and Fua, Hezbollah had forced residents in the areas surrounding the predominantly Sunni Muslim Madaya to move into the town. It was slowly forcing them to starve in a bid to ease conditions for the two Shia towns, he said.

It is a view echoed by the pro-opposition monitoring group the Syrian Observatory for Human Rights, which has claimed that the Syrian army and Hezbollah is using Madaya as a tool to break the sieges against Shia civilians. It accused the international community of “silence” in the face of extreme human suffering. Earlier this week  an exchange of wounded fighters and civilians from Zabadani, Kafraya and Fua took place in a rare UN-backed local truce. But Madaya remains encircled.

Mr Assaf, who is originally from Madaya but is now based in the United States, said that its inhabitants were desperate to end the siege both on their own town and on the Shia towns. They have held protests calling for aid to be allowed in and the injured and sick to be allowed out.

“I can’t stress enough that the people of Madaya do not want that equation of Kafrraya and Fua versus Madaya he said. “Just leave us alone.”

The siege has now lasted for almost 200 days and it has been months since aid was last allowed into the town.

Food ran out two months ago, and conditions have rapidly deteriorated in the subsequent weeks.

According to Mr Ibrahim, 10 men have so far died trying to break the siege, killed either by sniper fire or by stepping on the land mines that have been laid around the edges of the town to prevent its inhabitants from escaping. A further 15 men and six children have lost one or both of their legs or a hand because of land mines.

He said that there were 850 infants in urgent need of milk, while six newborn babies had died because their mothers were unable to feed them.

The price of food has spiralled uncontrollably, with a 1kg bag of rice costing as much as $100. One photograph showed a car for sale in exchange for 10kg of rice or 5kg of baby milk  formula. The vehicle was incorrectly attributed to Mr Alloush, according to Mr Ibrahim. “I wish Mr Jamil had a car,” the activist said. “He could sell it rather than dying like that. The poor man used to have a bike and nothing more.” He added: “All those who have cars, they are offering them for sale.”

The activists said that they had tried and failed to raise the plight of the entrapped inhabitants of Madaya. They have become convinced that no one cares.

Mr Ibrahim said that he and fellow residents had resorted to wishing that they were dead. He said: “How do we feel about the world? If you don’t care about us, please just help us to die like humans, not like that. Ask someone to bomb us and forget about us.”