Who is (really) protecting Syria’s archaeological and historical heritage?

Who is (really) protecting Syria’s archaeological and historical heritage? 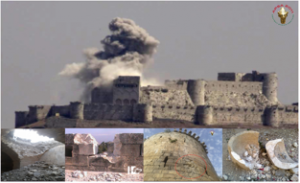 Corbulo, an officer fighting for the Roman emperor Nero (reigned AD 54-68), once said that a war is won with a pickaxe and not just with a sword. He was referring to how soldiers dug under fortifications and opened tunnels to besiege enemy cities and destroy walls. Free Syrian Army and Islamic Front rebels have for months made tunnels under the old city of Aleppo to reach the Carlton hotel facing the citadel, i.e. the main headquarters for Assad’s troops and his so-called National Defense Guard. A little more than a fortnight ago, they managed to implode this Late Ottoman building from below, putting to practice this Latin maxim and causing massive damage to regime ranks. The “war of tunnels” (in Idlib, at Wadi Dayf airbase, in Aleppo) appears to be a new – but long and patient – way of scratching into a regime war machine still prevailing on the ground and in the air.

Yet Corbulo’s words can also apply to what is actually occurring as we speak: an attempt by Bashar al-Assad, courtesy of international organizations such as UNESCO and NGOs like Heritage for Peace, to pose as the defenders of archaeology, of Syria’s huge historical and architectural heritage, and, why not, of civilisation itself… Bashar’s propaganda stints often portray destructions merely as the result of fundamentalist Islamic armed hordes wantonly reducing historical monuments and sites to rubble, plundering any precious movable relics or destroying them in order to satisfy their “Wahabbi” agenda. If we are to believe the conference organizers, who have screened out any undesirable coverage of an event which has made security and staff at Unesco’s Paris premises quite edgy, “plans and grand designs” are under way to restore the unique remains of all periods of Syria’s history, from Neolithic to Ottoman. What the Damascus General Directorate of Antiquities and Museums (DGAM) announces it will restore are the buildings obliterated or looted to a large extent by the very regime they are working for and representing abroad.

After three years of devastation, in the wake of the bombing of entire ancient cities from the air or from SCUD launchers, the Assad regime has just sent to Paris a delegation of archaeologists and museum curators to attend a three day conference, from May 26th to 29th. At UNESCO premises at Place de Fontenoy near the Eiffel tower, Assad’s civil servants are discussing a budget for some of the country’s – damaged, to say the least – architectural jewels, most levelled in the last two years by MIG fighter jets and barrel bombs filled with TNT. Two-and-a-half million dollars (minimal sums, considering the scale of the destruction) have been set aside for a three-year restoration project of Medieval citadels destroyed by the conflict. These so-to-speak drops of water provided by Denmark and Belgium, are to be handed over to “experts” and to a General Directorate staff acting as firemen for a power structure which has – literally – committed arson from the very day its phosphorous bombs reduced to ashes the Middle East’s largest Ayyoubid, Mamluk and Ottoman souk in Aleppo in the winter of 2012. Many archaeologists such as Paolo Matthiae, of La Sapienza University in Rome and the director of excavations at the third millennium BCE site of Ebla since 1965, are attending and lecturing. It was the very Matthiae who had rewarded Asma al-Assad with an honoris causa doctorate from his university in October 2004, during a much media-covered visit to this 55 hectare urban Bronze age centre. Other scholars and prominent archaeologists