Hared and Dareen Al Sadi are exhausted. A year ago, the Syrian couple and their two-and-half-year old boy, Ubeid, tried to cross the Mediterranean by boat, but had to turn back; they then made their way to Melilla, the Spanish enclave in Morocco. That was 20 days ago. Now they are waiting for permission to cross the Strait of Gibraltar into Spain proper, from where they will make their way on to northern Europe.

Growing numbers of Syrians fleeing the conflict in their country are now making the same journey. So far this year, more than 3,000 Syrians have requested asylum from the Spanish authorities in Melilla. Last year, Spain accepted all of the 1,681 Syrians who asked for admission; but during the same period, Germany received almost 24,000 asylum requests, and Sweden more than 16,000.

We have money, we just want our boy to be able to go to school without a bomb falling on his head”

Spain is clearly not the destination of choice for these war refugees, but many now have little choice as the situation in their home country becomes more desperate, and crossing by sea increasingly dangerous. Only 130 Syrians chose to resettle in Spain last year: there are much larger communities in Germany, France and other northern European nations, which have offered refugees more of a welcome. Spain has rejected the European Commission’s proposal for EU member states to take up to 20,000 Syrians. The majority of those fleeing the civil war, four million people, are currently in Lebanon, Jordan and Turkey.

But Spain is likely to have to take more and more Syrian refugees under the so-called Dublin Regulations, which require refugees to apply for asylum in the first European country they enter. Last year, Spain received just over 5,000 requests, mainly from Germany, Switzerland and Sweden, from refugees who had made their first European stop on Spanish shores. 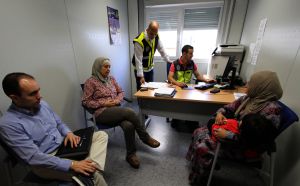 A Syrian woman requests asylum in the Spanish offices at the border of Melilla and Morocco. / Antonio Ruiz (EL PAÍS)

Sitting in a café in Melilla, the Al Sadis say they paid €18,000 to cross the Mediterranean. “We were taken out to sea from Turkey with 150 other Syrians, and then to a larger vessel. But the weather was so bad we couldn’t get on to the other ship. We were at sea for 12 hours. It was very frightening.” Eventually, the vessel turned back. The couple flew to Algeria and then made their way to the border with Morocco, where they were taken by traffickers along the coast to Melilla.

“There is no water, no electricity in Syria, there is no hope,” says Hared, a successful real estate agent. “But we don’t want to stay in Spain,” they add. “Our goal is to get to Holland and start a new life there. I want to start a business. We have money, we just want our boy to be able to go to school without a bomb falling on his head.”

One of the reasons, until now, Syrians fleeing their country have not tried to enter Europe via Melilla has been the slowness with which the Spanish authorities there process requests for asylum, not allowing refugees to cross to the mainland until their request has been approved. “Even when the Syrian regime started gassing people, nobody wanted to ask for asylum. They didn’t want to end up stuck here,” says Antonio Zapata, a human rights lawyer who works with refugees in Melilla. But things have changed.

Syrians are now being allowed into mainland Spain while their requests are processed. But unlike in Germany or Sweden, where the authorities have responded to the arrival of growing numbers of Syrian refugees, in Spain, the increase in numbers has not seen any improvement in infrastructure or policy.

Even when the Syrian regime started gassing people, nobody wanted to ask for asylum. They didn’t want to end up stuck in Spain”

On the other side of the Melilla border crossing, in Morocco, a large group of Syrian families is waiting in Beni Ensar, where the Spanish authorities have set up a consulate to process asylum requests.

But Hared Al Sadi says he doesn’t want to request asylum for fear of having to stay in Spain, and is set on going to the Netherlands. One option he is looking at is buying a false Spanish identity card, which can be had in Morocco for around €650. Those who do request asylum are taken to a processing center in Melilla. Around 80 percent of the 1,700 people staying there at the moment, more than three times the official capacity, are Syrians, and around 500 of them are children. The conditions are appalling. 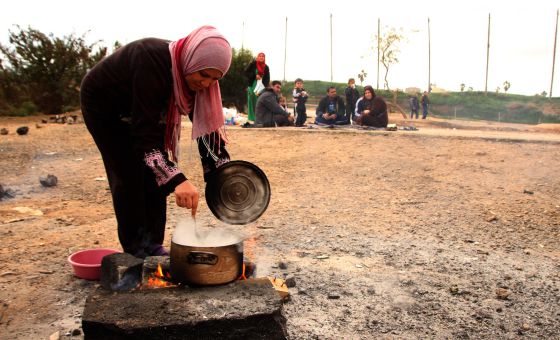 Most of the men and women who are now forced to wait for months here while their applications are processed say they do not intend to stay in Spain. “This is not a welcoming country, they rob us in the supermarkets and the police do nothing,” says Wael, a young man who fled his native Aleppo to avoid being conscripted into the Syrian army.

Early on a Thursday morning, a large ferry leaves Melilla headed for Malaga with some 200 Syrians aboard. Some are carrying suitcases, blankets, and clothes in plastic bags. Others are traveling in just the clothes on their back. This is an emotional moment: setting foot on the Spanish mainland means their flight is over. The majority of those making the crossing are young couples with small children. The elderly have remained in Syria, often having given their life savings so that their children can start a new life. Everybody here has a tragic story to tell, of family members killed or missing.

In other countries there is financial help for refugees, and there is work. In Spain, after six months, they dump you in the street”

On deck, one family looks out to sea through the mist, waiting for their first glimpse of the Spanish mainland, of Europe. Shadi Suede, a father of four, crossed Algeria carrying his smallest child in a backpack. He says he would have done anything to avoid trying to reach Europe from Libya aboard a rusting hulk. “I prefer to die in Syria than drown in the Mediterranean,” he says. He too intends to head for northern Europe, to Germany, to Norway, or Sweden. “We have professions. In other countries there is financial help for refugees, and there is work. In Spain, after six months, they dump you in the street,” says Emin Ehmed, an engineer from Kobane who has spent €3,000 to get here. But most of the passengers sit silently, waiting, staring into space, seemingly lost in their thoughts as they begin the next stage of a new life.

Finally, six hours later, the mountains of Malaga rise out of the mist. On the quayside there is nobody waiting to meet the new arrivals, just police officers and Red Cross volunteers. But when the boat is moored and the gangway set down, there is a crush as this latest wave of refugees make their way, at last, into Europe.