Will Syria’s Children Be Forever Haunted by War? 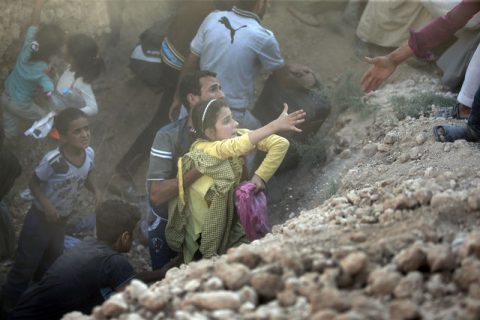 Despite fleeing far from airstrikes and gunfire, many Syrian refugee children find they can’t get away from the effects of the war. A group of therapists and volunteers in Turkey are working to help traumatized youngsters whose “ability to trust, to daydream and to be creative has been shut down”

ISTANBUL – Nine-year-old Amal isn’t in school these days, but this week she gets to remember what it feels like to be in a classroom again, the World Post reports.

When war ripped apart her country, Amal’s world fell apart. Like the more than 2 million other Syrians now in Turkey, her family fled here in hopes of finding refuge from the bloodshed now in its fifth year.

There are no airstrikes here in Istanbul, where Amal now lives. There are no checkpoints or sounds of sporadic gunfire. Compared to her city of Aleppo, much of it destroyed by bullets and barrel bombs, this is indeed a refuge.

And yet for many Syrian refugee children like Amal, war is still everywhere – and access to psychological support is often rare, let alone access to an education.

One Turkish mother-and-son duo, along with a team of trained therapists and nearly 200 volunteers – all part of Project Lift – seek to change that.

« These kids are in survival mode, » says Leyla Akca, a clinical therapist and chief adviser of the Istanbul-based organization. « They perceive everything as threats. Their ability to trust, to daydream and to be creative has been shut down. »

Project Lift provides psychosocial support to traumatized Syrian refugee children, some of whom suffer from symptoms of post-traumatic stress disorder. Members of Project Life also work to integrate the Syrian children into their host communities.

Founded in 2014 by then 16-year-old Emir Özsüer with the help of his mother, Esra, the organization has expanded rapidly. A pool of Turkish, Syrian and international volunteers – all of whom have to undergo at least 16 hours of trauma training before being allowed to work with the children – is growing bigger.

But the group also faces serious obstacles: funding, state bureaucracy and a lack of resources necessary to address the needs of a staggering number of traumatized kids.

They need more Arabic speakers, staff say, to answer the sheer volume of texts and calls from frantic parents, desperate for assistance and eager to discuss the mental health of their children. After workshops, staff try to follow up with the most traumatized children in their homes.

Many parents themselves find it impossible to navigate the education system without language skills. And while there are private Arabic-language schools, without legal means to work in Turkey, many refugees cannot afford them.

« They’re not growing developmentally, » Akca warns. « They’re stuck in the age where they had their trauma. »

Some of the Project Lift students have survived bombings, seen loved ones killed in front of them or had parents detained – never to be seen again.

In one room, young children participate in a movement exercise, only shaking the body part the group leader says to move. Next door, a therapist shows boys and girls how to make their own musical instruments out of used plastic water bottles and beans.

« We practice impulse control, » clinical psychologist Merve Minkari, 26, explains. « Our intervention is protective. When you change one thing when they’re small, it’s carried through a lifespan. »

In another classroom, Akca leads a group through an art therapy exercise in which children are told to draw fish in the sea.

« All these fish are different, » she says, at the front of the classroom. « Some are small and some are big. All these different fish are able to live together in the sea. »

When asked which activity he liked the most, Youssef explodes with excitement. « Playing the drums! » he says, beaming. « We made music on our legs! »

It’s this joy that leaves 22-year-old volunteer Mohammed hopeful. A Syrian refugee himself, Mohammed, who asked that his last name not be printed, arrived in Turkey from Aleppo a mere four months ago.

Just like the children he’s now volunteering his time to help, he says there was nothing left for him in Syria.

He leans in to quiet young Amal, gently asking to see what she’s drawing. Then he says, « We can help reignite their spirits. »

This article originally appeared on the WorldPost, a partnership between The Huffington Post and the Berggruen Institute. For weekly updates about international news, opinion and analysis, sign up for The WorldPost email list.