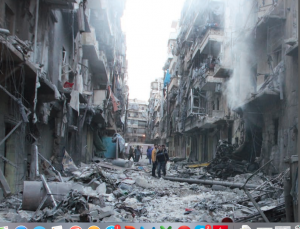 « These attacks happen in an instant but they are ripping families apart and they affect them for a lifetime. »

The authors of an Amnesty International report that condemns the Assad government for crimes against humanity in Aleppo have accused the international community of a « cold-hearted display of indifference » to the gruesome deaths of thousands of people.

“If people aren’t shocked by the severity of abuses and violations occurring on a daily basis in Syria, I’m not sure what’s shocking anymore,” said Nicolette Boehland, who spoke with Syria Deeply about the findings of the report.

The “Death Everywhere” report details grisly war crimes and other abuses in the city by President Assad’s government forces and armed opposition groups on a daily basis.

Amnesty notably concludes that the government’s policy of « collective punishment » of civilians in Aleppo amounts to a crime against humanity.

Crimes against humanity include widespread or systematic attacks knowingly directed against any civilian population, such as the use of indiscriminate weapons.

It further describes the horrible power of barrel bombs – oil barrels, fuel tanks or gas cylinders packed with explosives, fuel and metal fragments dropped from helicopters on civilian areas – to kill and maim.

“These attacks happen in an instant, but they are ripping families apart and affect them for a lifetime,” Boehland told Syria Deeply.

« I saw children without heads, body parts everywhere. It was how I imagine hell to be, » a local factory worker told Amnesty.

“It became routine for the helicopter to be there above us, so I finally stopped looking up. I smelled death everywhere,” said another.

Barrel bombs have reportedly killed over 3,000 civilians in Aleppo province since the U.N. Security Council adopted a resolution early last year condemning their use in populated areas, threatening “further steps” in the case of non-compliance.

The human rights watchdog called on all sides to allow humanitarian access, and criticized the international community for turning its back on Aleppo’s civilians.

Boehland spoke with Syria Deeply about her findings.

Syria Deeply: What are the findings of your most recent report?

Boehland: The government has been launching systematic and continuous barrel bomb and air attacks on the civilian population of Aleppo city and, based on the widespread and systematic nature of these attacks, we concluded that they amount to crimes against humanity. Armed opposition groups have also been launching indiscriminate attacks on the civilians of Aleppo, some of which amount to war crimes.

In terms of humanitarian access, we found that the government has been systematically targeting the primary access road from Turkey to Aleppo, pinpointing ambulances and humanitarian aid convoys. We also documented several cases of arbitrary detention, torture and abductions by both the government and armed opposition groups. The enforced disappearances and torture committed by the government was so extensive and so widespread that we found these practices, too, amount to crimes against humanity.

Syria Deeply: Can you describe the scale of human rights abuses inside Aleppo today?

Boehland: The scale is almost impossible to imagine. It was one of the most overwhelming scopes of violations I have ever had to document. Every neighborhood had hundreds of violations to record.

Not to mention that the violations I laid out took place in the backdrop of appalling humanitarian conditions, where residents told us that they are raising cats and rabbits for food.

We looked extensively into eight barrel bomb attacks which caused the deaths of 188 civilians and only one fighter. To give you a sense of the kind of attacks that are taking place, one attack, on June 16, 2014, two barrel bombs were dropped on a public market in the main square in Sukkari neighborhood. The blast sites hit very close to a humanitarian aid distribution point, where around 150 people were waiting in line for food baskets. Local monitors collected the names of 77 civilians – and no fighters – who were killed in just this one attack.

Another example was a missile attack on a school in an opposition area launched by government forces on April 30, 2014. The attack struck a drawing exhibition that had been advertised beforehand. We found that 21 civilians were killed in this attack, 19 of whom were students under the age of 12. The injuries were unbelievable. One young woman was blinded by the attack, lost the use of both of her legs and still had shrapnel lodged in her body when we spoke with her.

Another boy had shrapnel lodged in his entire back as a result of this attack. It was an unfamiliar experience to see a boy that young in such despair and shock about what had happened. At the age of 12, he was already cognizant that the world was ignoring the suffering inside Aleppo and across Syria. Imagine having that type of realization and shock at such an early age.

One father had lost two daughters in that attack and his third 11-year-old daughter had lost the use of one of her legs. These attacks happen in an instant but they are ripping families apart and they affect them for a lifetime.

Somehow this information has not been fully reaching the international community, even though each of these incidents is more shocking than the last.

Syria Deeply: What is the primary concern of current and former residents of Aleppo?

Many of them described the intense fear caused by not knowing where the next barrel bombs would hit. Several survivors of barrel bomb attacks told me they would constantly look up to the sky to spot the helicopters known for dropping the bombs. They said they do not know where to run when a barrel bomb hits, because they [barrel bombs] are unguided and can change course, even with a gust of wind. If people take shelter under a building, they risk being trapped if the building collapses, but then they can also be hit if they run into the middle of the street.

One man described trying to seek shelter with his brother and friend after hearing the hissing sound of a barrel bomb falling. He followed his brother to a corner and tried to shield him with his body while his friend shielded his back. His friend had his head and back split open and died immediately. He described not being able to sleep at night because of shrapnel that remained in his body following a barrel bomb attack. The doctors who treated him had too many patients on the day he was injured to get all of the shrapnel out of his body.

Aleppo residents expressed particular concern about “double-tap” strikes, in which a first barrel bomb strike is followed by a second, which usually occurs nearby up to 30 minutes after the first. In these types of strikes, those who come to rescue the injured or to document the event, such as members of the local Civil Defense forces, human rights monitors or the media, can be killed.

Syria Deeply: Can you describe the living conditions inside the government- and opposition-held territories?

Boehland: Residents told us that access to basic necessities like food, water and electricity are very limited. Last winter, people spoke of not being able to afford gas to heat their homes, so they were burning wood and whatever they could find. Some residents said they were wearing all the clothes that they owned in order to stay warm. The doctors we spoke with emphasized the poor sanitary conditions, which have led to a rash of lice and scabies cases as well as new kinds of diseases.. The needs are more acute in opposition areas, but residents living in both government- and opposition-held territories reported not having enough money to buy food and medicine to get healthcare, so it’s a dire situation for civilians everywhere in Aleppo.

Syria Deeply: The U.N. has passed several resolutions including Resolution 2139, which demanded the cessation of: the indiscriminate use of weapons in populated areas; subjecting civilians to arbitrary detention, torture and enforced disappearances; and restricting the delivery of humanitarian assistance. How have these resolutions translated into action on the ground? Have conditions improved?

Boehland: The Syrian Network for Human Rights estimates that more than 11,000 civilians have been killed since 2012 by barrel bombs. More than half of that total have been killed since the passing of Resolution 2139 in February 2014. It’s not simply that the resolution has been defied and ignored – the attacks have actually increased since it passed.

The situation now is one of complete impunity. The U.N. identified the major violations being committed with Resolution 2139, so it seems they are well aware of what’s going on in Aleppo and across Syria, but they have completely failed to act on the continuing violations.

Syria Deeply: How do we fight this “culture of impunity”? What are some of the recommendation you call for in your report?

Boehland: We are making a broad call on the international community to recognize the scale and the scope of civilian suffering taking place in Aleppo and across Syria. We are also calling on the U.N. Security Council to impose targeted sanctions on those who are responsible for war crimes and crimes against humanity and to act upon and enforce their own resolutions as well as to impose an arms embargo on the Syrian government. And lastly, we urge the Security Council to refer the situation in Syria to the ICC [International Criminal Court] as a matter of urgency. The people of Aleppo and across Syria simply can’t wait any longer.